No Shitty Coffee in Paris

During a recent heated discussion with AB about where to go for coffee in Paris:
AB: “You don’t even like coffee!”
Me: “Well, I don’t like drinking shitty, over-roasted coffee.”

I seldom drink coffee. Once in while, especially when I travel for work and tend to get less sleep than usual, I would have some cappuccino at breakfast – partly to unblock my stuffed nose (no idea why sleeping too little causes this though) and because the coffee is usually better than what I would get at a regular cafe/brasserie. Even then, I usually only drink about a third of it before it gets too cold.

We ended up at Coutume Café @ 47 rue de Babylone, 75007, on the other side of the Seine (we usually hang out on the right bank). The striking decor is reminiscent of a Science laboratory with its white tiles and stainless steel sinks – that act as miniature indoor gardens – complete with conical flasks used to serve ‘carafe d’eau’ (tap water). Only that it has been transposed into a typical Parisian interior with its high ceilings, mouldings and oak floors.

It was crowded when we were there on a Saturday afternoon and I was feeling a little self-conscious about taking photos, so all I captured was my order of “Café Coutume”.

Priced at 6€, this is a single shot of Costa Rican coffee served with honey and a chunk of parmesan cheese (no joking!) that you’re recommended to taste in alternate turns between sips of the slightly acidic coffee. While this was an unusual pairing and took a few sips to get accustomed to the various distinct tastes, I actually quite enjoyed how the pungent parmesan and sweet honey complemented the coffee.

Here are a few other cafes that I would recommend if you’d like to have some quality coffee in Paris:

La Caféothèque @ 52 rue de l’Hôtel de Ville, 75004 – the name is a combination of “café” (coffee) and “bibliothèque” (library), which is quite apt given its extensive selection of single-estate coffee beans. 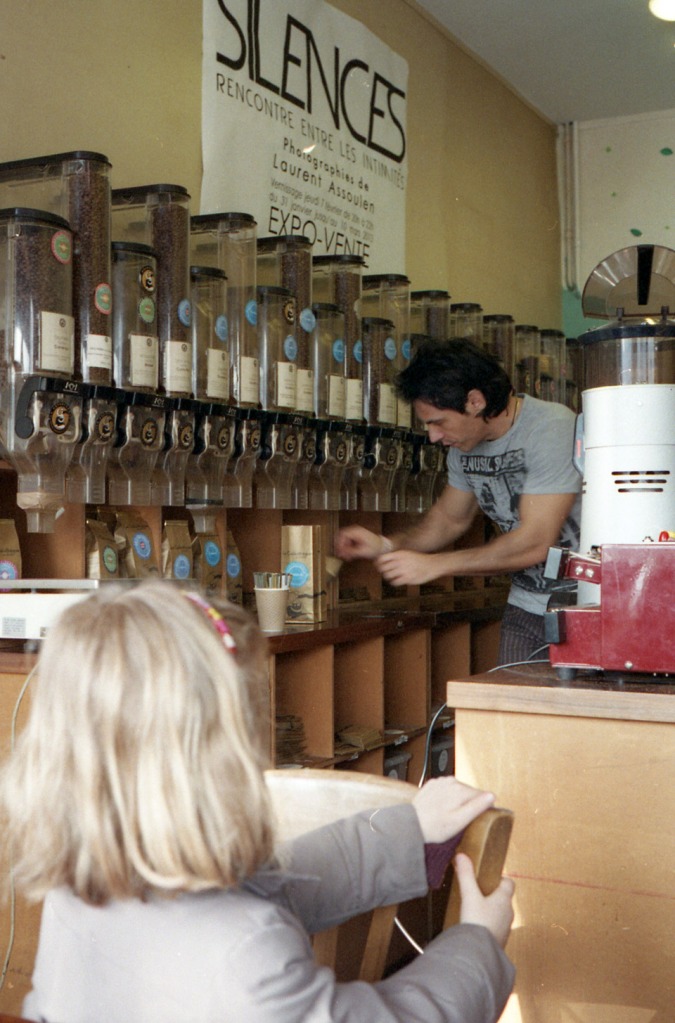 Opened by a former Guatemalan ambassador to France a decade ago, La Caféothèque roasts its own beans and you can try some of their excellent coffee – always served with some dark chocolate and some water – in the cafe or buy some freshly ground beans to enjoy at home.

The cafe is quite large and features several intimate salons in different styles. My favourite is the one that is all the way inside, with a lovely wall that is covered with coffee plants.

I really like these photos taken at La Caféothèque with AB’s rangefinder.

Ten Belles @ 10 Rue de la Grange aux Belles, 75010 is a little double-level cafe near Canal St. Martin that oozes plenty of style and also attracts an equally hip ‘bobo’ (bourgeois bohème) crowd. The pastries served here are made by the team at Le Bal Café – we tried a brownie and it was good (lots of butter, sugar and chocolate)!

Apparently the colourful, collapsible stools – which you can just about see on the extreme left – have been so well-received that they are now available for sale.

When I took the photo on the left, I was focused on the barista at work at the stainless steel counter. It was only when I was editing the photos (after more than a year later) that I noticed there was a couple enjoying an intimate moment right outside the cafe.

Café Craft @ 24 Rue des Vinaigriers, 75010 is on the other side of the canal from 10 Belles and offers a rather different, minimalist and relatively quiet ambience. It is both a cafe and a co-working space, which means that you can work for as long as you like (during its operating hours) if you pay a nominal fee. The coffee is well made here and the banana chocolate cake is delicious. 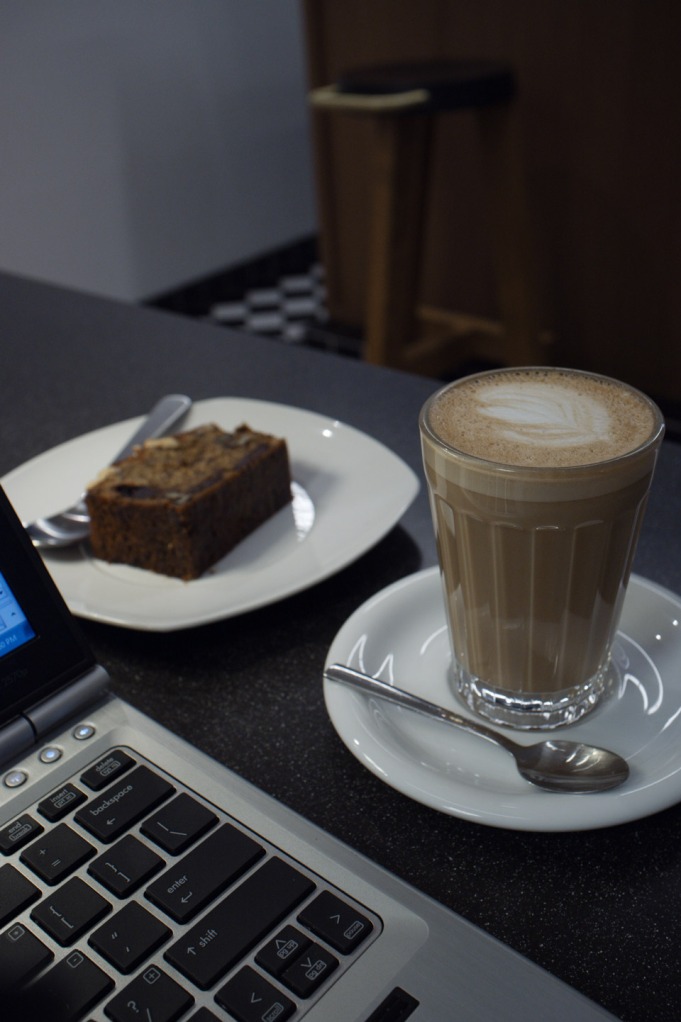 By the way, I love the checkered tiled floor – as you can see in the photo below, which shows some of the notes that I had furiously made in my notebook following my conversation with a prostitute in Belleville.

For further information and recommendations on where to find good coffee in Paris:
Paris by Mouth: Percolating in Paris
The Financial Times: Aussie coffee arrives in the French capital
Good Coffee in Paris: Nice blog on some of the best spots to get a proper caffeine fix
Time Out Paris: Round up of 10 top places to enjoy coffee

24 replies on “No Shitty Coffee in Paris”