Belgian chocolate is reputed to be amongst the best in the world – the domestic consumption is one of the highest worldwide, as is its chocolate export trade.

When I first moved to Brussels, I was a little disappointed that there wasn’t an artisan chocolatier at every other street corner. Large commercial brands such as Godiva, Neuhaus and Leonidas don’t count in my opinion.

Now that my family’s visiting me in Brussels for the first time, it was a no-brainer that I’d introduce them to a variety of chocolate makers when they are here. The question was who, where and how?

You see, there is only one chocolatier that I’d recommend to friends or colleagues visiting Brussels – I’ll get to this later. However, it’d have been remiss to leave out the other chocolate makers who have been integral to Belgium’s reputation and history as a chocolate nation.

Anyhow, here’s sharing our experience so that you can decide for yourself – if you are in Brussels – if this is something you want to go for. If not, at the very least, I hope that the recommendations and information that follow will come in handy!

We met at Grand Place at nine in the morning. In front of the Godiva flagship store that is located in Brussels’ tourist centre.

We didn’t enter the shop nor did we try any chocolates from Godiva. We did, however, learn about the history of the brand which started in 1926 and the origin of its name – which was inspired by one Lady Godiva who wore no clothes as she rode through the streets of Coventry on a horse to appeal for lower taxes for the townsfolk.

While we were at Grand Place, our guide gave us a brief history lesson of this UNESCO World Heritage Site. It was interesting to learn that:
(1) The asymmetry and differences in the exterior design of the Town Hall / Hôtel de Ville were due to its prolonged construction due to economical and space constraints, and
(2) Most of the buildings around the square, except for the Town Hall, were burned down and destroyed during a major attack by the French troops in the late 17th century. Our guide told us that rumour has it that this attack was under the command of Napoleon who was worried that Brussels would surpass Paris as the most outstanding city in Europe – which would have been impossible since he was born in 1769. I suppose this is how some rumours start!

We moved on to the Galeries Royales Saint-Hubert – which is always a pleasure to stroll through on a sunny day. Except on weekends when it is packed with throngs of tourists.

Galeries Royales Saint-Hubert is made up of three sections – namely, Galerie de la Reine, Galerie du Roi and Galerie des Princes. Inaugurated in 1847, this was the longest and highest covered passage in the world. It was designed by Jean-Pierre Cluysenaer who came up with the idea of replacing the warren of meandering streets with a covered shopping arcade where the bourgeoisie in the area could stroll in comfort and safety.

Soon after its opening, Galeries Royales Saint-Hubert became a popular meeting place for the literary set. It also attracted luxury purveyors such as Delvaux to set up shop within its impressive glass arcade.

In 1857, a Swiss by the name of Jean Neuhaus opened a pharmacy in Galerie de la Reine. Being rather ingenious, he coated some of the medicine with chocolate to make them more palatable. Eventually, he decided to focus on making chocolates instead of selling medication. This business was then handed over to his grandson, Jean Neuhaus Jr., who invented the praline – a hard chocolate shell with a creamy flavoured filling – in 1912. 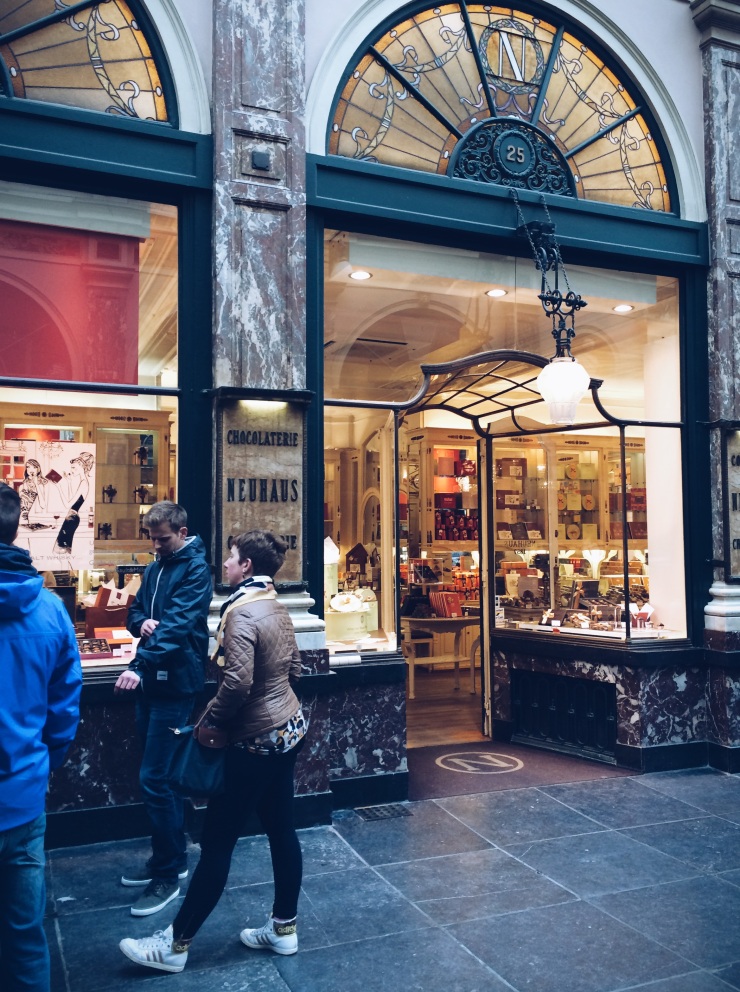 Today, you can still visit the original Neuhaus shop at 25 Galerie de la Reine. We didn’t try any of the chocolates by Neuhaus on this tour as we were told that the quality has dropped in the past year since the company was acquired by an American firm.

Moving on, just a few doors down, we arrived at our first chocolate stop: Corné Port-Royal at 5 Galerie de la Reine. The specialty here is apparently its hazelnut and almond praline. I decided to try the seasonal palet violette instead as it was recommended by the shop assistant. The fragrant violet aroma was a nice change from the usual dark chocolate that I would eat.

Now that I’ve had my first taste of cocoa of the day, I was ready for more. It seemed like we were off on a good start. Or not…?

The next chocolate stop was at Chocopolis, which I had passed on many occasions while on the way to Galeries Royales Saint-Hubert. I wasn’t impressed by the chocolate that we tasted nor by the overall ambience of the shop which seemed like a tourist trap – and cannot see why it was included within a chocolate tour that’s supposedly focused on independent and artisanal chocolatiers. I suspect that there is a commercial partnership between Chocopolis and Viatour.

Moving on, we went to the Viatour office which was round the corner for a chocolate-making class. This was something that we were all looking forward to and I thought it’d be fun for my family to get their hands sticky with some hands-on, chocolaty action. 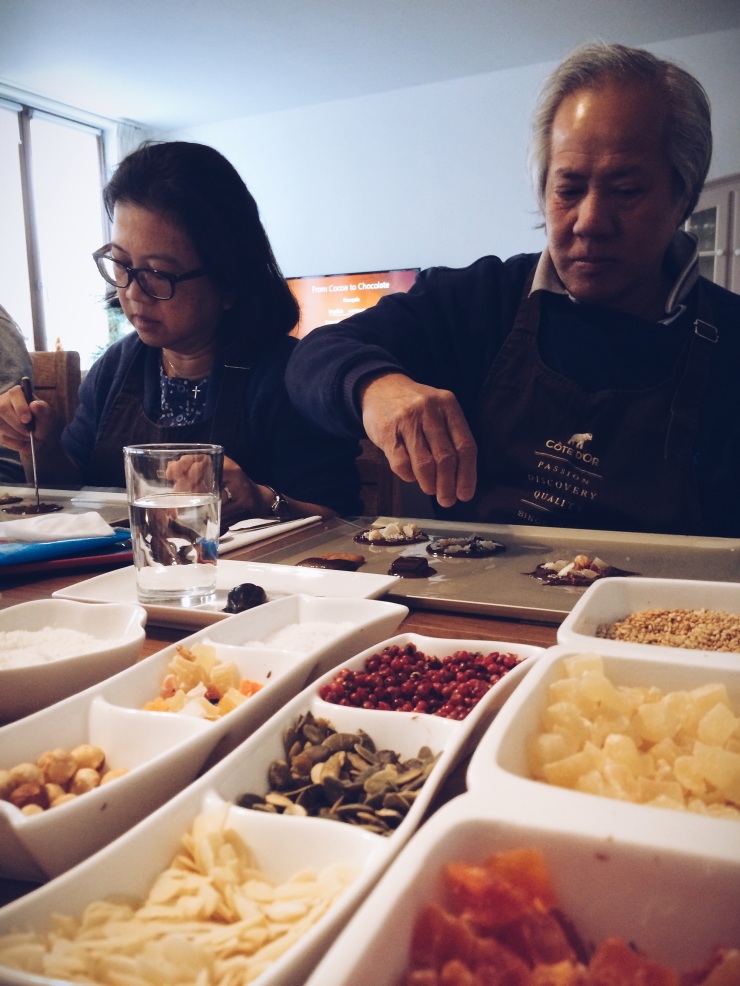 The chocolate-making class fell short of what I had expected based on what I had seen on Viatour’s website. What did we do? We poured melted chocolate onto a plastic film and put toppings on them – which was fun enough, but nothing to shout about.

Then we were shown a (promotional) video on the production of chocolate – which was created by the company that provided the chocolate that we were using for the class. There was a basic demonstration of how pralines are made – we didn’t make any ourselves and only two people in the group got to pour melted chocolate into the moulds.

It’s a shame that the chocolate-making class was so elementary – it felt like “Chocolate 101” for children. Not only could it have been more challenging, it would have been more engaging if there was an actual chocolatier who was providing the demonstration and explanation.

Don’t get me wrong – our tour guide was friendly, cheerful and provided interesting information but she wasn’t a chocolate expert. Neither was the young lady who was demonstrating how to dip a speculoos biscuit into chocolate or to pour melted chocolate into a praline dish.

Back on the walking tour, we stopped at Laurent Gerbaud @ 2D Rue Ravenstein. I had tried his chocolates once and they were nice enough, though they are not my favourite in Brussels. What was memorable about his shop is the story of its beginnings – which was inspired by Gerbaud’s two-year stay in China, hence the shop’s motif is based on the Chinese logogram for ‘chocolate’.

Also good to note is that Gerbaud doesn’t use sugar, alcohol or butter in his chocolates. He also works with Domori – which makes excellent chocolate themselves too – for his chocolate blends.

Our next stop was at Sablon, which is named after ‘sable‘, the French word for ‘sand’. The area used to be a gathering spot for merchants. There were many holes in the ground which were filled with sand to make it easy for people and horses to pass through.

At Sablon, there’s Wittamer, Alex & Alex and Godiva representing Belgium. There are also the ‘foreign’ chocolatiers and confectioneries such as Patrick Roger and Ladurée. My favourite on the square is Pierre Marcolini. The name may sound Italian, but he’s definitely Belgian.

While the presentation is important, the chocolates are the stars. Unlike other chocolatiers who buy pre-made chocolate from big factory makers, Pierre Marcolini makes his own chocolate blend, working with small cocoa estates.

One of my favourite purchases here are the single origin tablets (Carré2) which come from around the world, including Java, Cameroon and Cuba. Each tablet has nine squares, with the distinct aromas of each morsel lingering in the mouth moments after it has been eaten. Mmmm.

The tiny bite-sized chocolates come in clean-cut designs. There are various flavours to choose from including the signature “Pierre Marcolini” grand cru, as well as Earl Grey tea and orange blossoms. My favourite is the “Quatre Epices” (four spices) – cinnamon, clove, cardamom and ginger.

Are you still reading? Or maybe you’re drooling all over the screen? 😉

Last stop: Mary @ 36 Galerie de la Reine. The original Mary Chocolatier opened in 1919 and is located on Rue Royale, for here was where the members of the royal family passed through every now and then in the past. The rocco-style interior also adds a certain bourgeoisie ambience to the shop.

No artificial colouring or preservatives are used in the chocolates from Mary. When we were at the shop, we sampled truffles with rose champagne filling – these were heavenly. Mary is definitely one of the better and finer chocolatiers in Brussels, though Pierre Marcolini remains the top in my opinion.

Phew, that was a lot of chocolate in four hours! Good thing this was a walking tour, otherwise I might have bent over from eating too much chocolate. Hope that you enjoyed this virtual chocolate + history trail in Brussels!

15 replies on “Chocolate trail in Brussels”