A few months ago, I wrote about seeing the world in monochrome with a brief comparison between colour and black and white photographs.

On a recent weekend, something caught my eye as I passed the Stad Brussel Atheneum Robert Catteau. It was a beautiful outline of green vines covering one of the windows at the school’s entrance.

I love the building’s elegant curves and grey stone exterior, which is Art Deco-ish with the fluid lines of Art Nouveau. Built in 1925, it was designed by François Malfait – a Belgian architect responsible for the Belgian pavilion at the 1913 World Exposition in Ghent, the columbarium in the Laeken cemetery and the Royal Theatre in Brussels Park.

I tip-toed as high as I could without losing my balance and raised my arms (and phone) about my head to take a picture through the dirty window. The first shot was crooked but one look and I knew that I was onto something special.

It took a few tentative taps on the iPhone before I captured something that wasn’t crooked AND had the desired level of exposure. At least I didn’t climb onto a makeshift ‘stage’ to take the photographs! 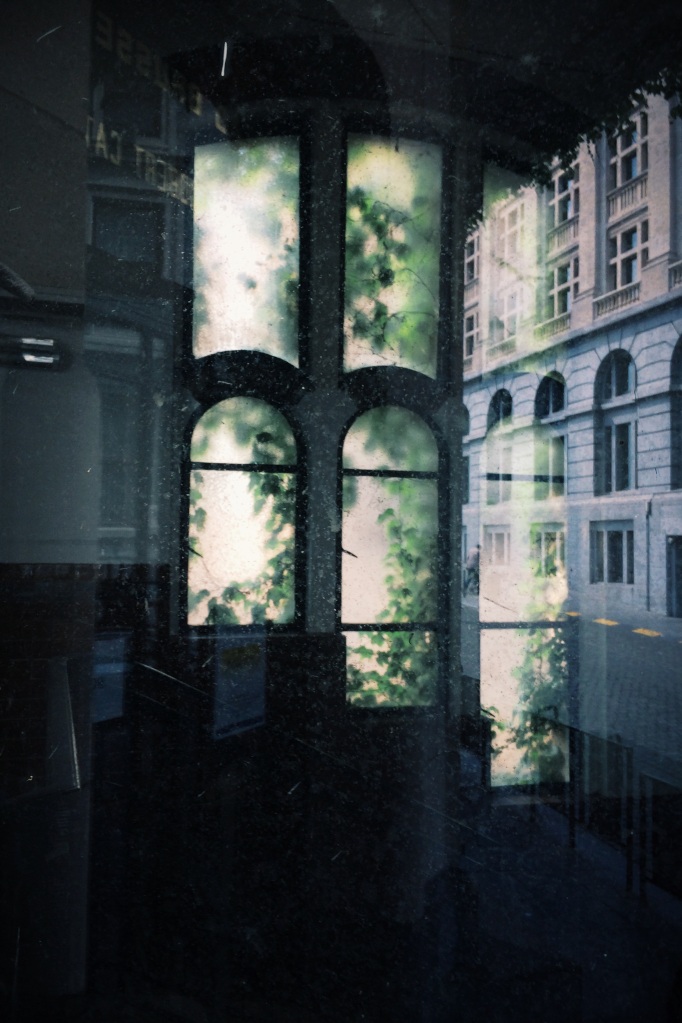 I love how the vine-covered window takes centre stage, flanked by the reflection of the street behind me and the unlit interiors. The grimy window enhances the mood of the image, giving a look reminiscent of old photographs shot on film. By chance, a cyclist passed behind me, appearing too in this layered image.

While adjusting the image on my phone using the vsco cam app, I decided to use a black and white filter to see how it would look. I loved it!

The black and white treatment exudes a distinct mood – one that is a little sombre, of something left behind. Whereas the colour version of the same picture has a light and ephemeral atmosphere.

What do you think?

Looking back and forth between these two images – I must have done this for more than 100 times (I can be a little obsessive like that) – I thought about an image showing the view from the rooftop of a low-rise building in Hong Kong. This is one of my favourite image from that trip.

I had taken the photographs in raw format with my Fuji x100, converted them using the Agfa AP25 film simulation in Raw Photo Processor before stitching two images together to create this.

Looking at this picture again after more than a year, I decided to increase its contrast in Photoshop to give it a grittier mood. I quite like it. What about you?

With this, I wish you goodnight and a brilliant weekend! Meanwhile, I shall attempt to resume editing more photographs 🙂

17 replies on “When Monochrome Says It Best: Brussels + Hong Kong”