One of the nicest things about Brussels is its striking Art Nouveau and Art Deco architecture. In spite of the indiscriminate destruction of the city due to Bruxellisation (Brusselization), there remains several historic buildings that have been carefully restored to their former grandeur.

Not only can you admire them while walking along the streets, some of these buildings are also open to the public. One example is Maison Cauchie (Cauchie House) in the Etterbeek commune, opposite Parc du Cinquantenaire.

The house was built in 1905, the year when renowned Art Nouveau architect, painter and designer Paul Cauchie married his wife, Carolina Voet. Maison Cauchie was designed to function both as the couple’s home and workplace, as demonstrated by the central artwork on the building’s facade which reads “Par Nous, Pour Nous” (by us, for us). 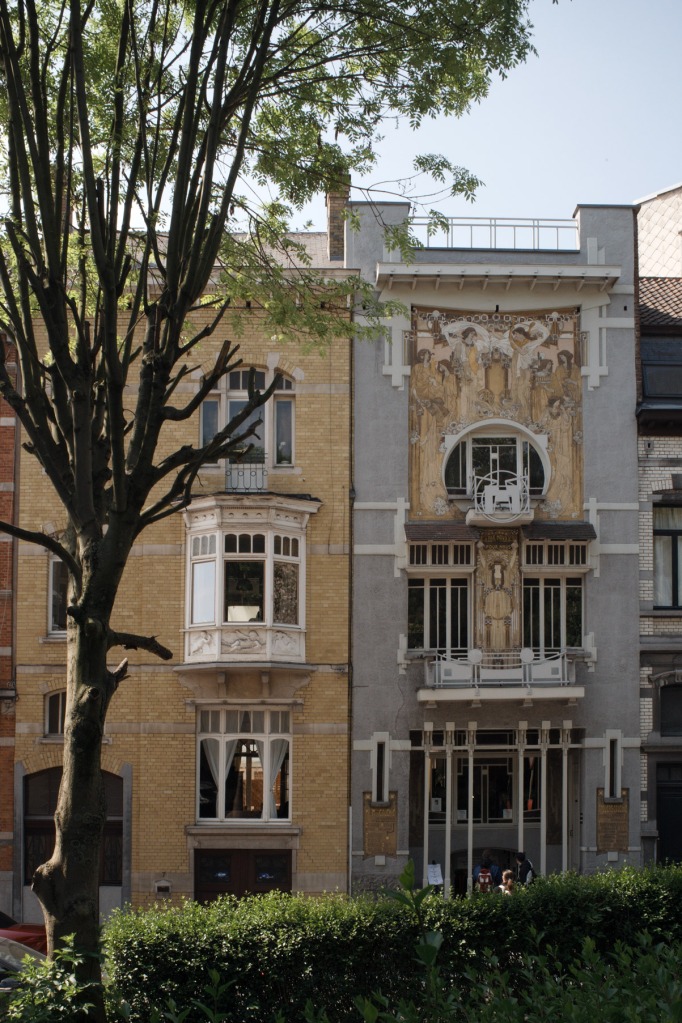 Years after both husband and wife had passed away, Maison Cauchie fell into disrepair before it was purchased by Guy et Léo Dessicy who spent 15 years getting it restored to its original splendour.

We joined a guided tour led by the Dessicy’s grandson which I found very informative. Some interesting facts:

What was particularly amusing was the pair of doors at the ground floor: Only one of them opens into the house while the other (on the left) is a trompe l’oeil. The main purpose of the latter is to maintain the symmetry of the building, though this is also a reference to Japonism as it is believed that a fake door will mislead evil spirits and prevent them from entering the house!

Like in some other historic buildings in Brussels (e.g. Horta Museum), photography is prohibited inside Maison Cauchie. I’m not sure why this is so and would have liked very much to be able to capture some of the details of the artwork around the house. Perhaps it is to encourage visitors to buy the catalogue or postcards, but I would have rather be charged a nominal fee for taking photographs.

Fortunately, before realising that photography is forbidden, I had taken a photograph of a sgraffito in the centre area of the living room. This had caught my eye as the style of this symmetric design is different from what I had seen around and inside of the building.

This features a girl with heavy double eyelids and long straight hair. There are circular patterns around her and four eyes beneath her face, and no rose motif.

This sgraffito is placed in front of a portion of the chimney. Someone had cut a hole (!) through the centre of this sgraffito and probably used it as a fireplace of sorts.

While the sgraffito suffered significant damage, as you can see here, it was restored using archival photographs of the living room. However, because the photographs were in black and white, it was not clear what were its original colours so the craftsmen used colours corresponding to those in the rest of the sgraffiti in Maison Cauchie. As such, I thought it would be quite fitting to render this photograph in black and white.

There’s plenty of information online in English and in French about the design and architecture of Maison Cauchie.

I’d recommend Lia’s post if you’re interested to read more about the art of sgraffito and Japonism. The post on Auror’ Art & Soul contains additional information (in French) about the design of the house and includes many images. For more pictures of existing works of sgraffito, check out this blog on Art Nouveau and Jugendstil.