I was in Frankfurt for work last week. During my stay, I had no frankfurter, one wiener schnitzel, and surprise, ate twice at a Japanese sushi-sashimi bar.

I’m not going to rave about the sushi or sashimi though the quality was acceptable given that I was at an airport in a landlocked location. Eating raw fish also seemed like a good choice after all the German food, sweets and alcohol consumed during the conference.

Talking about sushi, I have to tell you about Otaru, a small port city less than 30 minutes by car from Sapporo.

Otaru is famous for its intricate music boxes, glasswork, as well as sushi restaurants – of which there are supposedly more than 100 serving a resident population of around 130,000 people and the many tourists that visit the city. If you are short on time, pop into one of the 20-odd sushi restaurants on Sushiya-dori (Sushi Street), which is between Sunmall Ichibangai and Hanazono Ginza shopping area.

That was what my family did when we arrived in Otaru on a Saturday afternoon after we had dropped off our luggage at our hostel.

We stayed in a cute little place called The Otarunai Backpackers’ Hostel MorinoKi – where the owners of a traditional Japanese house let out some rooms and beds in their home. We had a private room where we slept in bunk beds and had use of the communal bathroom and kitchen.

It was like staying at someone’s home and quite cosy. The living room had comics and board games for use while the resident cat roamed freely. We were amused to see some giant sunflowers outside the house (or maybe, sunflowers do normally grow to such heights?)

The Otarunai Backpackers’ Hostel MorinoKi is just a few minutes on foot from the Sushi Street. During the short walk, I found, using my mobile, several recommendations for one particular restaurant.

Masazushi / 政寿司 is one of the more expensive sushi restaurants on Sushiya-dori. The quality of the food was excellent and we enjoyed everything that we ordered. The cuttlefish entrée was delicious! It was served with a small dish of soy sauce with a raw quail egg, into which you are supposed to stir the sea urchin before dipping the strips of cuttlefish into the mixture. 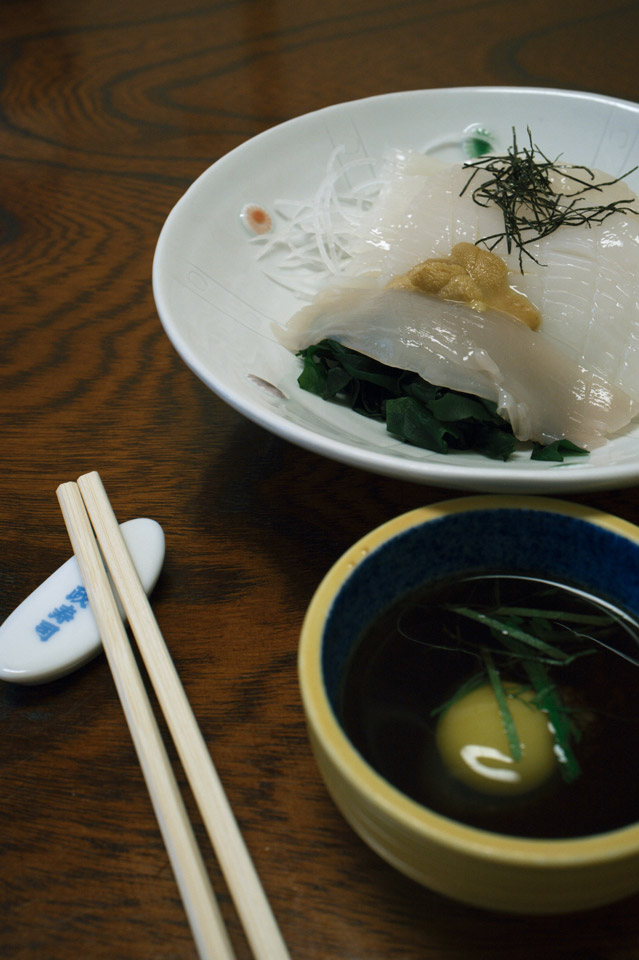 The sushi was probably amongst the best that anyone in my family ever had. It was so incredibly good that we couldn’t help exclaiming so every few mouthfuls!

Now, here was where the dental drama (see title) started to unravel. Allow me to backtrack a little…

Sapporo: I was abruptly awoken in the middle of the previous night by a sudden sharp pain in my teeth. I realised to my dismay that my medical kit with painkillers were in the car, which happened to be parked in the hotel’s multi-storey automated garage – which, by the way, was really cool as you just need to drive and align the car with the tracks on the ground, get out of the vehicle and the parking attendant will press a button to lift and park the car in an available spot.

My sister was deep in sleep and my parents didn’t hear my feeble knocking on their door. What does one do in such a situation in a heavily urbanised Japanese city like Sapporo? Go to one of the ubiquitous 24-hour convenience stores such as Lawson, 7-11 and Circle K.

There was one on the ground floor of the hotel. Alas, I wasn’t able to decipher the painkillers in their bright, colourful candy packaging.

So I went back up to the hotel and approached the staff at the lobby. Turned out that the staff on night-shift didn’t speak much English and since I didn’t speak any Japanese, we played a game of midnight charades.

It worked and I went back to my room grasping a little box that had mostly unidentifiable characters printed on it. At least I recognised “痛”, which is the same character in Chinese and Japanese Kanji scripts for “pain”, which was reassuring enough.

The next morning, it appeared that the discomfort had disappeared and I drove without a glitch from Sapporo to Otaru.

Otaru: The pain in my teeth returned with a vengeance just when I had finished my wonderful sushi lunch at Masazushi.

Having had several dental problems in recent years including a few root canals, I had an ominous feeling. This was, however, the first time I had experienced such a sudden and sharp toothache on which painkillers didn’t seem to have an effect and I had to keep cold water in my mouth to alleviate the pain (temporarily).

After lunch, we walked around the city looking for a dental clinic, keeping an eye out for the Japanese Kanji characters “歯科医院” (this was one of those times when I’ve been super glad that I read Chinese). It being a Saturday afternoon, most of the clinics were closed. After what seemed like a dreadfully slow search, we found a dental clinic. Yay!

While waiting, I browsed the Internet to find information, in English, about going to the dentist in Japan in case there was anything that I needed to be aware of. I came across this hilarious account by an expatriate who is/was teaching English in Hokkaido which took my mind off the pain and learnt some dental-related trivia – for instance, most Japanese opt for a silver crown instead of a ceramic cap.

On his blog post, I also came across a cute cartoon about dental health care – which features Yobousan, the mascot of the Japan Dental Association. Yobousan is the anthropomorphic monk-like tooth that is brushing its head in the picture below and blushing as Ms Toothpaste prances seductively around him. Too funny!

Anyhow, finding a clinic was just the first step towards a happy ending for this dental drama. The next challenge was to communicate the problem to the dentists and nurses, who were really nice but barely spoke any English.

Thanks to technology, I was able to explain (sort of) the situation by reading the phonetic translations on Google Translate off my mobile phone. The word “itami”, which stands for “pain”, has since been incorporated into my very-limited Japanese vocabulary.

An ‘old school’ tool also came into play: The nurses brought out a well-thumbed copy of a Japanese-English dental dictionary with illustrations and short phrases, and pointed at certain pages to show me what they were going to do. This must have been something that was used in Dental Training 101: Treating Non-Japanese-Speaking Patients.

This was a rather unusual dental clinic with one main room with at least five dental chairs and a group of dentists and nurses rotating amongst the patients. I also found it odd that one of the dentists who attended to me did not wear any gloves while tinkering with my teeth. Are these normal in Japan?? 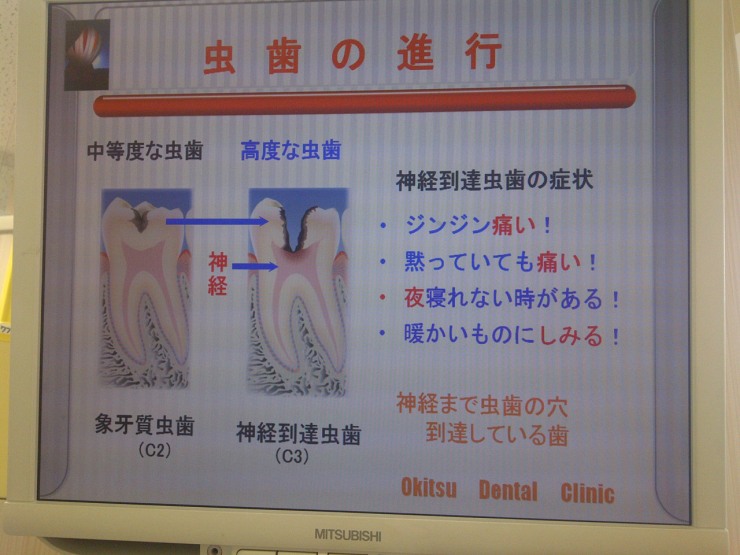 After showing me some images to explain the problem – as suspected, a root canal was required – the non-gloved dentist went on to remove the offending nerves in one of my teeth.

Relieved of my mind-numbing toothache, I was able to enjoy walking around and exploring Otaru. It was especially pretty by the canal at sunset and here’s where you would see several historic warehouses. Maybe I’ll write another post on Otaru to show more of the city… 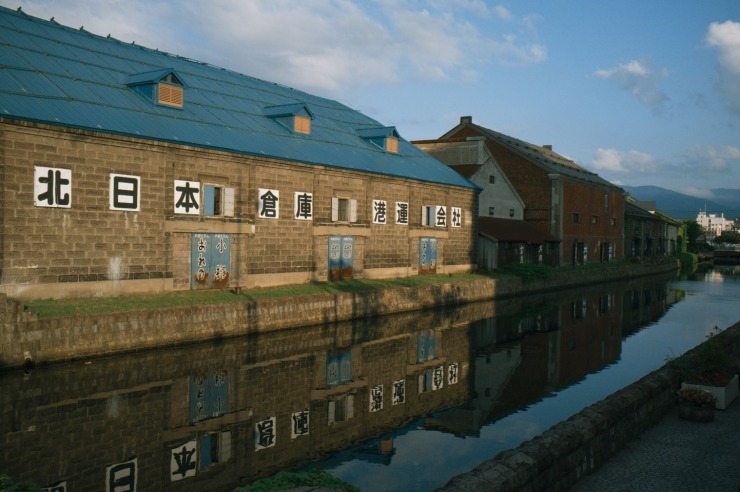 After much walking, we ended up at Sushi Street. Hungry, again, but also with tired feet.

We went into a random sushi restaurant, Sushi Dokoro Hikime / 寿し処 ひきめ and had seats at the bar which was nice as we could see the chef prepare our dinner.

While Masazushi is at least one notch or two above Sushi Dokoro Hikime in terms of the quality of the food, the sushi at the latter was nonetheless good with fresh cuts of seafood. I also liked that the service was friendly and prompt in what seemed like a family-run restaurant.

This was a nice and satisfying way to end off the day after all that drama : )