Antwerp on the water

This weekend, I finally got down to reviewing and processing all the photos that I took in Antwerp during a weekend getaway in April. Here are some photos taken around the city’s waterfront, from both sides, starting first with Sint-Annatunnel. Built underneath the river Schelde from 1931 to 1933, the St. Anna tunnel connects the old city centre to the modern Linkeroever neighbourhood on the left bank. While cyclists usually descend the 30 metres into the tunnel using the lift, pedestrians have the option of riding the original wooden escalators that have been in operation since the 1930s. Such elegant machinery! 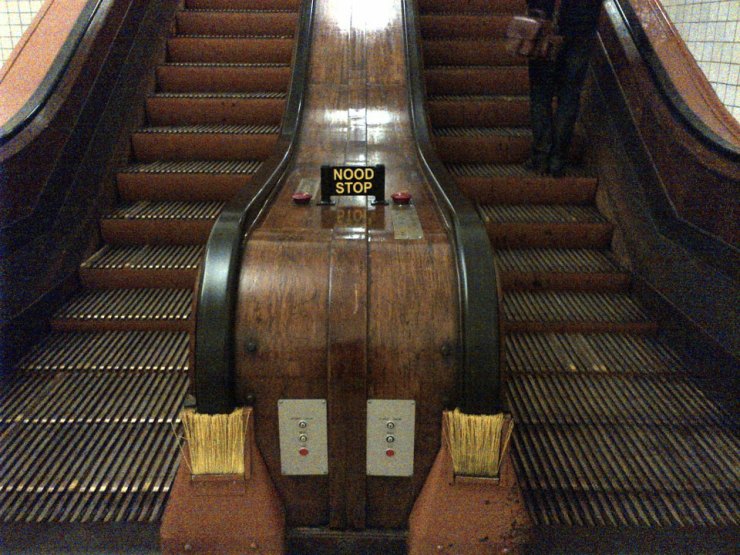 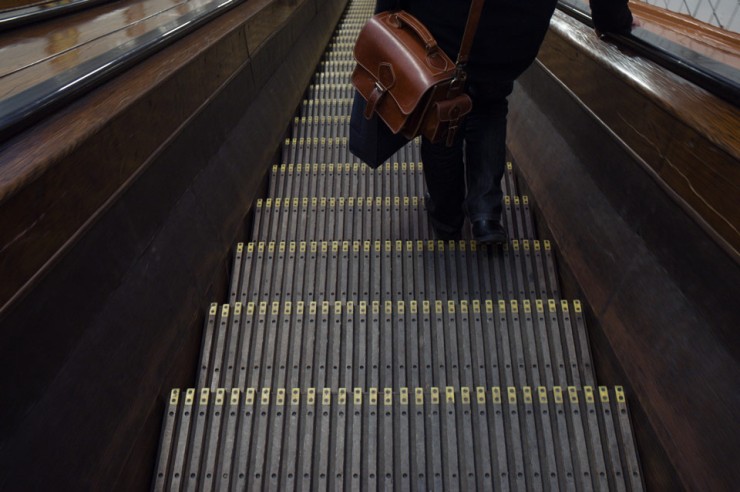 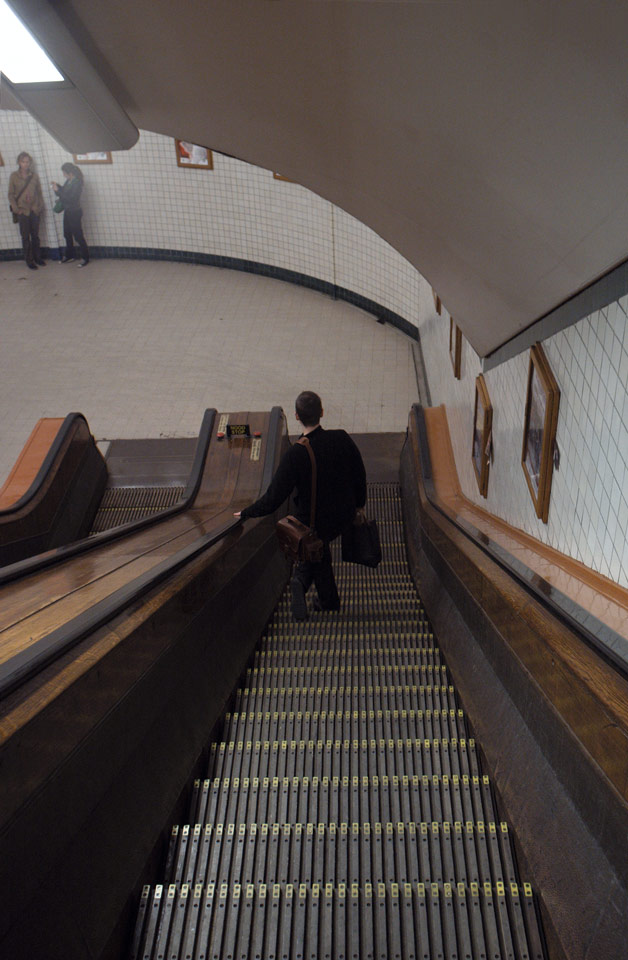 Stretching 572 metres, it takes around 10 minutes to walk the length of the tunnel. 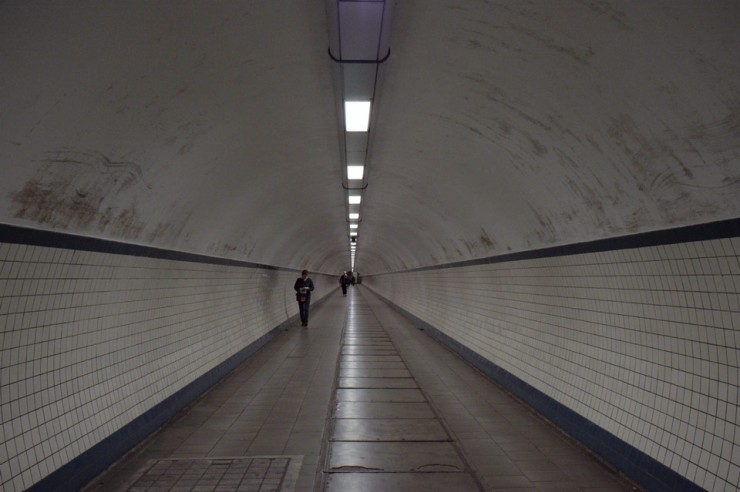 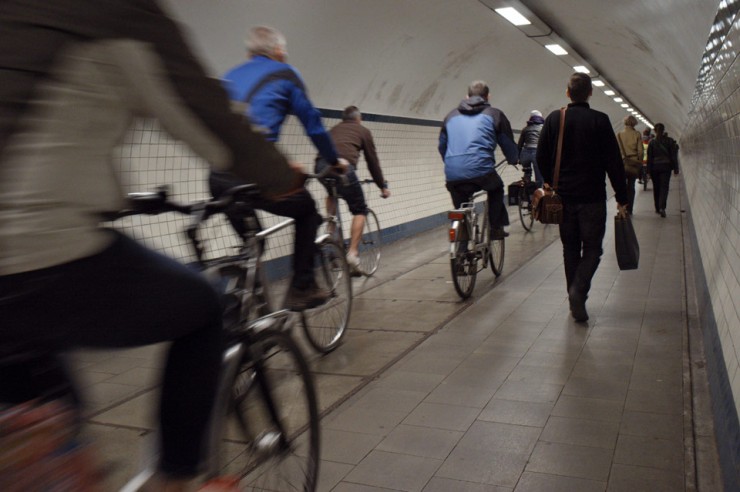 We had entered the tunnel from right bank, via a square called Sint-Jansvliet, and emerged on the other side, which presented a beautiful view of Antwerp’s old city centre: Complete with the cathedral and Europe’s first skyscraper, the art deco Boerentoren that was built in 1930. 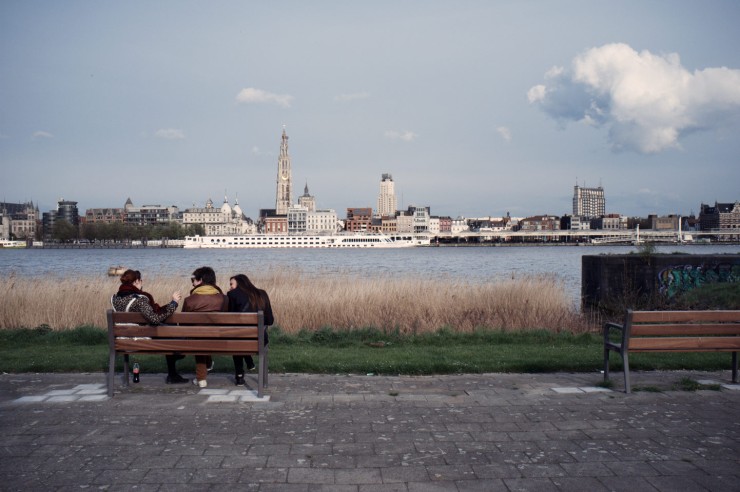 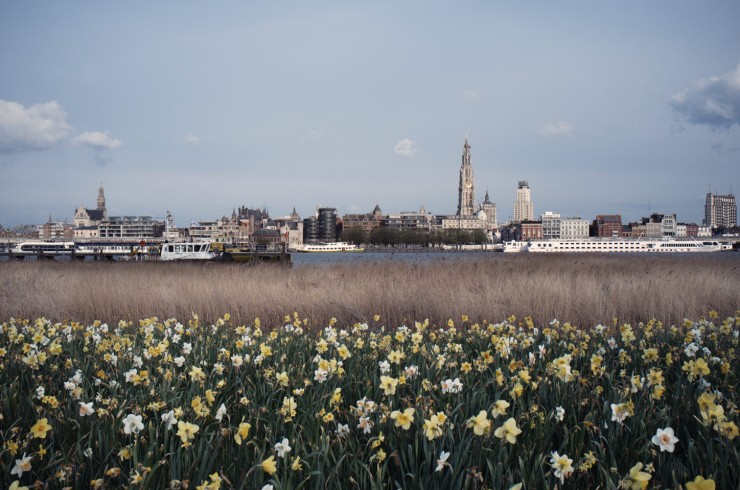 It was a slightly cloudy day, with a gentle breeze teasing the river grass, and made for a lovely stroll along the waterfront. From here, you can also see the distinctive red sandstone Museum aan de Stroom (Museum by the River). We were starting to get hungry and decided to find our way back to the right bank. 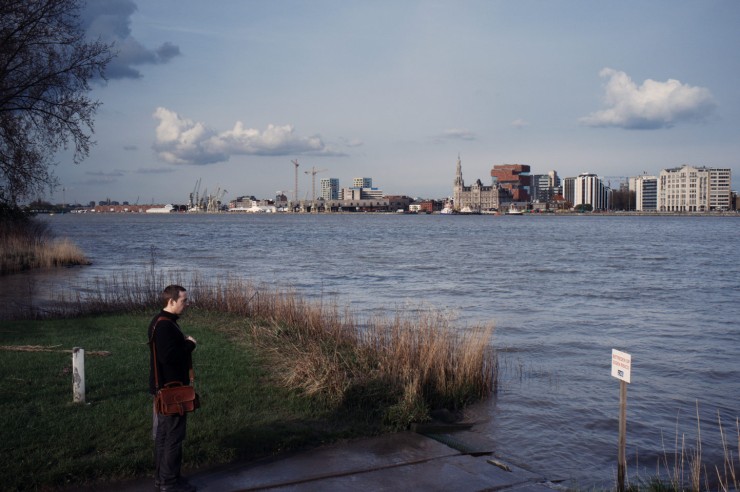 Instead of making a detour, we walked into the Linkeroever neighbourhood – which is very different from what we had seen of Antwerp so far. Is this what the suburbs of Antwerp are like, with most of the residents living in high-rise apartment buildings that would not have looked out of place in Singapore? 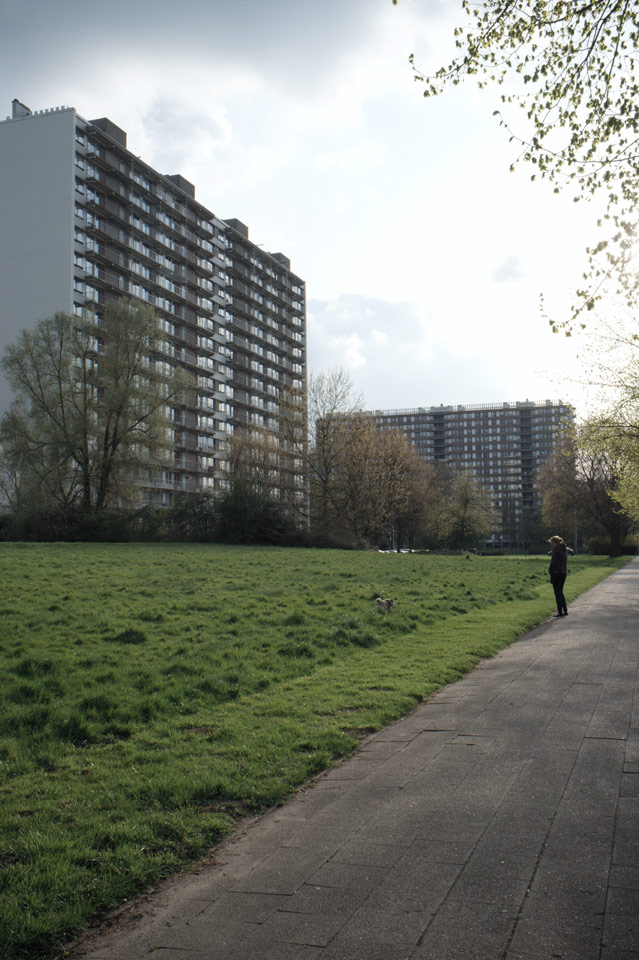 We boarded a bus to bring us across Waaslandtunnel (for vehicles only) and alighted at the old port area, which is not too far from Museum aan de Stroom (Museum by the River) @ Hanzestedenplaats 5. What an impressive and gorgeous building! I love how the architects have stacked slabs of Indian red sandstone to form this ‘sculpture’. 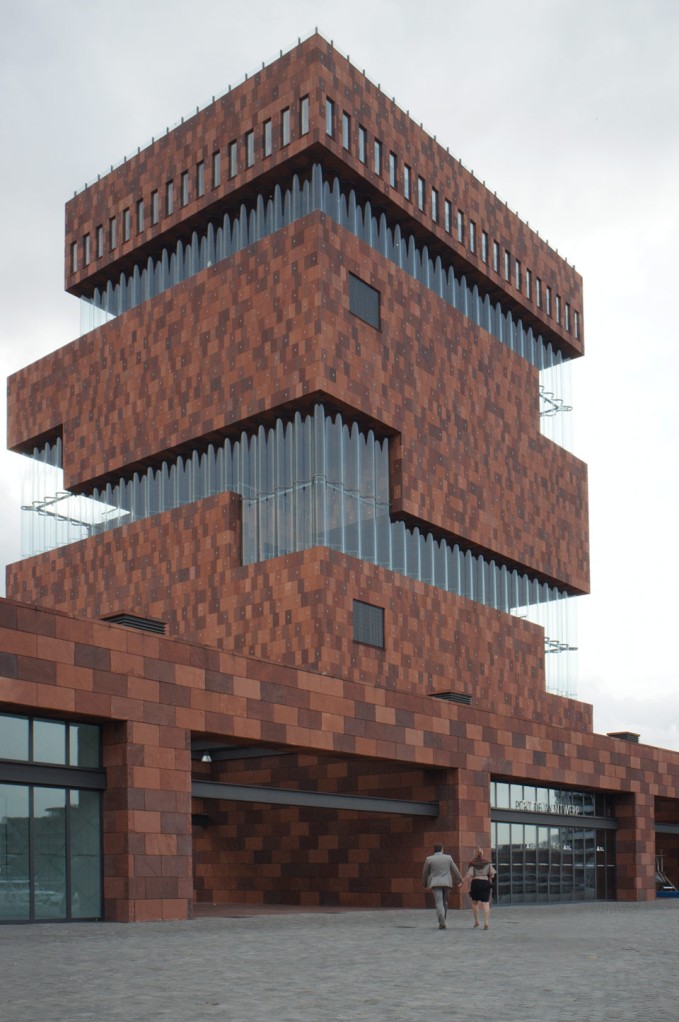 With every 90-degree turn that we took at each escalator landing, we were surrounded by views of the city as we went round and round the central tower of the museum. All 10 floors of it! The undulating glass panels also created a rather interesting perspective of the city, as though you are seeing it from under water. 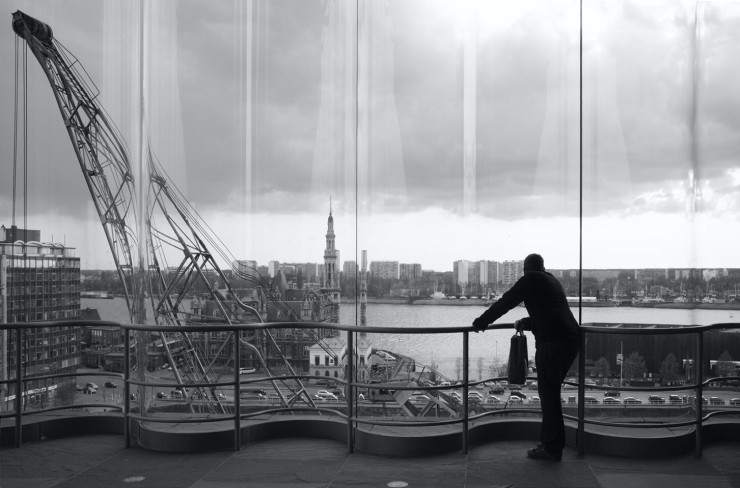 Finally, we arrived at the rooftop of the museum, just as the sun was setting. Those with vertigo might hesitate to walk up to the glass ‘walls’, but if you have no fear of heights, it’s fun to poke your nose / face out of one of the circular holes that have been cut into the glass for a clearer view of the city. 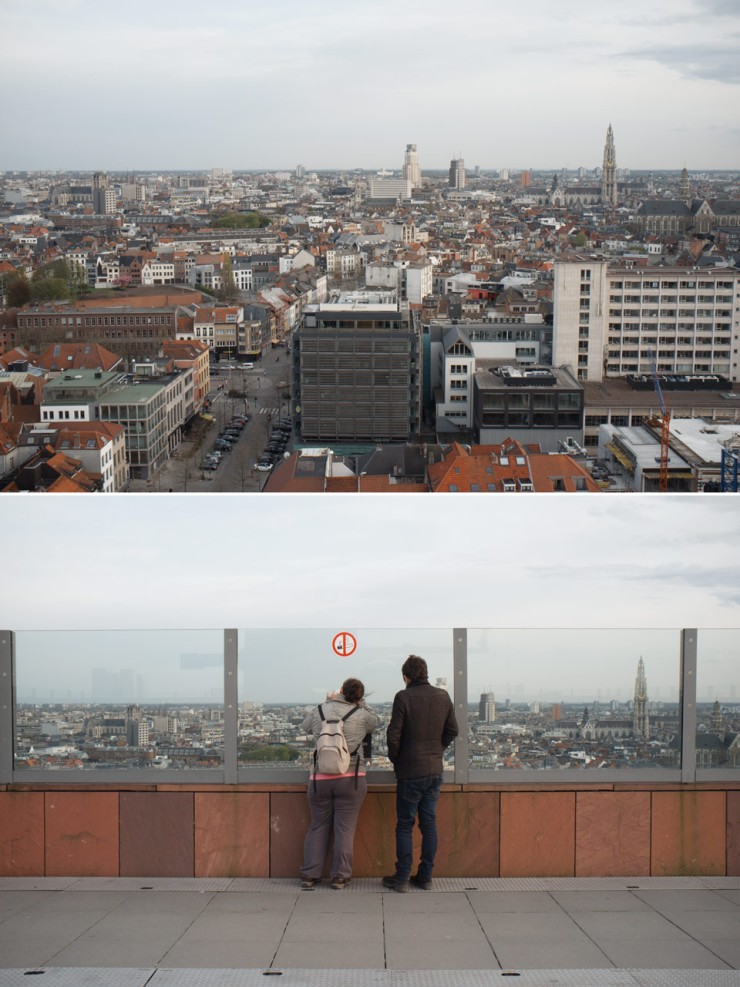 After walking a few rounds on the rooftop – which by the way, anyone can go up here without paying an entrance fee, it was time to make our gradual descent.

If you’re interested to learn about the design of the museum, click here and here. Here’s a screen grab of our walk across the St. Anna tunnel and along the west bank of river Schelde, which was around 2 kilometres, and here’s the link to the Google Map that I made for this short visit to Antwerp. 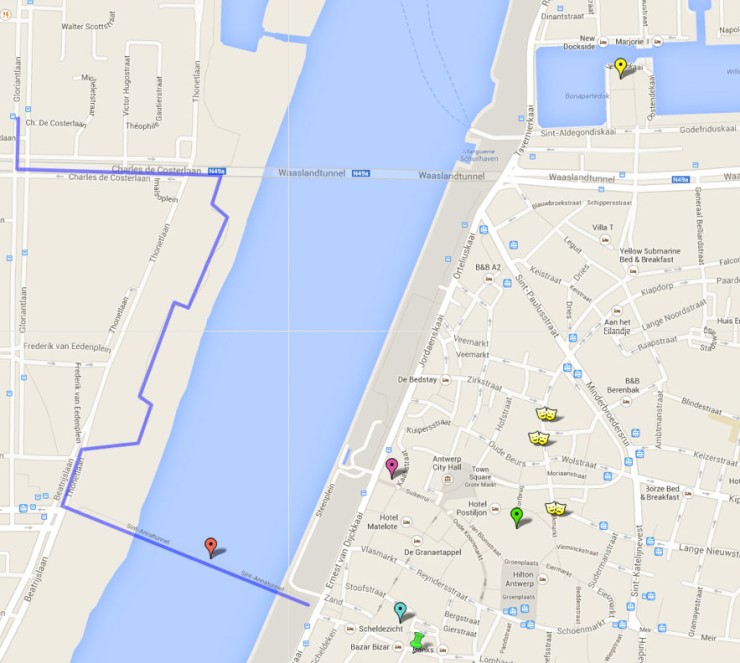 19 replies on “Antwerp on the water”