Its woody, musty aroma evokes images of misty rainy mornings in the wilderness. The first sip of freshly brewed pu-erh tea always makes me sigh contentedly, close my eyes and take a deep breath as I slip into a state of bliss and calm. Which is like the effect that a single malt whisky mixed with a dash of warm water has on me.

AB wrinkles his face when he drinks pu-erh tea. He says that it smells mouldy and tastes like dirt. I see what he means and agree that his observations are valid. It has an earthy taste due to the fermentation during the production and aging stages.

We have had long discussions about whether aged Chinese tea really tastes better than a young tea. Does old Chinese tea deserve the inflated prices? Could it be that I think an aged pu-erh tea tastes good because someone told me how wonderful it is?

Some studies show that wine experts, when blindfolded, could not differentiate between red and white wines. In a TED talk on the origins of pleasure, Paul Bloom highlighted that there are many studies that show that “if you believe you are drinking the expensive stuff, it tastes better to you.”

Surely, these show how perception can become reality.

All said, I still enjoy pu-erh’s musty flavour and prefer it over an English Breakfast or Earl Grey. I don’t care how long a tea has been sitting around in storage as long as I like its taste. Same goes when it comes to wine.

Not only is life too short to drink bad tea or wine, it is too brief to waste time mulling over how long before we can break open a bottle or brick of pu-erh tea. Don’t you agree?

If you are looking for quality Chinese tea in Brussels, I recommend Source de Lumière, which is run by Jing He. She selects all the teas and hosts regular tasting sessions on Sunday afternoons. You will be spoilt for choice here as there are many pu-erh teas to choose from! 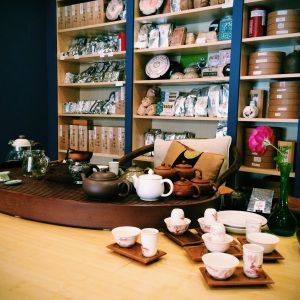