Stars in my eyes

Over the last few months, I’ve been taking photos mostly with my iPhone and editing them using the VSCO Cam app. Sometimes I miss using my Fuji x100, processing the raw files on Raw Photo Processor and making the final touches like straightening the lines in Photoshop.

However the former option is more convenient than the latter which is why my x100 has been gathering dust on the shelf. Plus we just moved to a new place and have not set up a table from which I could sit for hours to process photos. Until then, the iPhone will do the job in capturing every day moments.

The theme of this week’s Photo Challenge is “Twinkle”.

This brought to mind a few photos that I took on recent work trips with my phone. I couldn’t decide which would be the best fit, so have decided to include all of them here! Let me know what you think of them.

First up is the magical “Infinity Mirrored Room — Filled with the Brilliance of Life” by Yayoi Kusama.

The first thing we were told when we entered the room was that we have to keep to the path lest we stray off it and end up in the water that surrounded it. It was hard for me to keep this advice in mind as I was mesmerised by the dazzling lights and wanted to wander amongst them.

It was an amazing experience standing amidst these lights, which were reflected by the waters beneath and the surrounding mirrors.The LED lights changed colours, transforming the mood of the enclosed space every 15 seconds or so. I wish I had more time to enjoy Kusuma’s work but we were on a tight schedule so I only managed a few quick snaps on the phone.

This is currently on display as part of the “Seeing Through Light” exhibition presented by Guggenheim Abu Dhabi at the Manarat Al Saadiyat visitor centre on Saadiyat Island. The museum is set to open in 2017 as part of an ambitious cultural hub which will also include Louvre Abu Dhabi.

Next, still staying in Abu Dhabi, is the impressive crystal chandelier at the lobby of The St. Regis Abu Dhabi hotel. This made for a spectacular welcome when I arrived at the hotel in the night after a long flight. 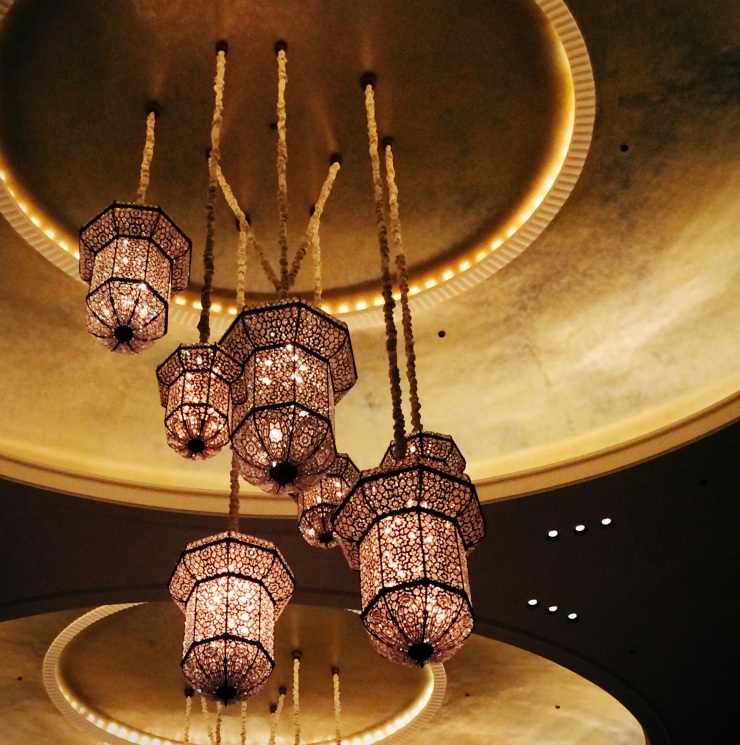 This is unlike any regular chandeliers that I’ve seen. You can’t tell in this photo, but these pieces were huge and hung from the high triple-floor ceiling. I wonder how much they weigh.

Closer to home, here’s a tightly cropped image of a merry-go-round in Parc Monceau in Paris. The twinkling lights enlivened an otherwise sombre and dull winter day.

We walked through Parc Monceau as we were at a nearby museum in the 8th arrondissement. The design of the park is unusual for Paris as it is in the English Romantic style, complete with follies such as an Egyptian pyramid, Corinthian pillars  and a Chinese bridge. Not my cup of tea but it was amusing to see these miniature “ruins” dotted across the park in this chic district of Paris.

The quality of this photo is not good as it has been cropped significantly. If I had taken this image with my x100 in raw format, the quality would have been superior to what came out from the iPhone. Nonetheless, I like the overall ambiance of this photo which reminds me of a watercolour painting (thanks to the low resolution).

If you are, like me, somewhere where it’s freezing and grey outside, here’s something to warm you up. Any guess where this photo was taken?

We were lucky with the weather as the skies were overcast in previous days. On this particular day, the skies were blue and the sun blazing onto the streets and waters. It was so sunny that it hurt to look at the waters without my sunglasses.

What do you think of these “twinkle” shots? Would be great to see your take on this topic too.

Meanwhile, I think I’ll pour myself some whisky to keep me warm before I call it a night. Bonne nuit!