Did you know that Ghent has more listed buildings than any other city in Belgium?

Just take a walk along the picturesque Graslei harbour. The former port area features an impressive row of guild houses and each medieval building has a story behind it.

For instance, Vrije Schippers was the guild house for the local bargemen, who had the right of passage along the city’s canals and were allowed to transport goods by ship through the city’s harbour. The “unfree” bargemen – those from outside Ghent – had to unload their cargoes outside the city and transfer them to the boats of their “free” counterparts.

The smallest house in the city is at no. 11 and it used to be a tax-collector’s house. A good example of Flemish Renaissance architecture, you can see its teeny weeny form in the photo below, with the city’s clock tower looming over it in the background. 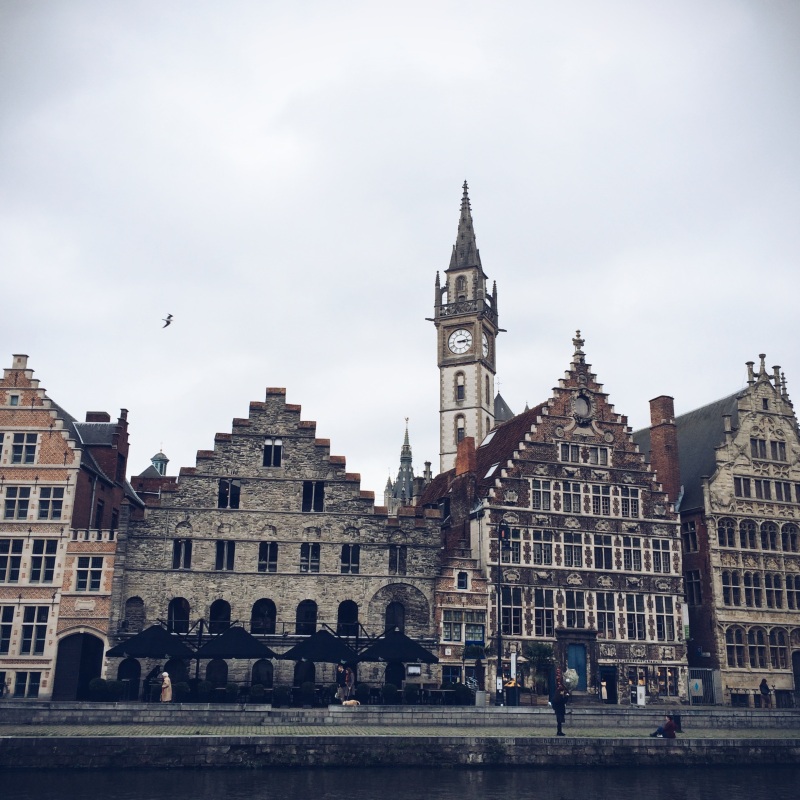 Across from it, on the other side of River Leie, is the Marriott hotel which occupies four buildings. One of these used to be a brothel, denoted on its facade by a pair of swans that are facing away from each other.

(Side note: Buildings featuring pairs of swans in the same direction are symbolic of gay venues.)

Come nightfall, it’s terribly romantic to stroll along the Graslei and Korenlei canals. Every night, the city’s major monuments, parks and buildings are illuminated, creating a magical, charming atmosphere.

This is part of an urban plan to reduce light pollution, raise public safety and decrease energy use in terms of public lighting. Click here for a walking map that will take you pass some of the highlighted spots. 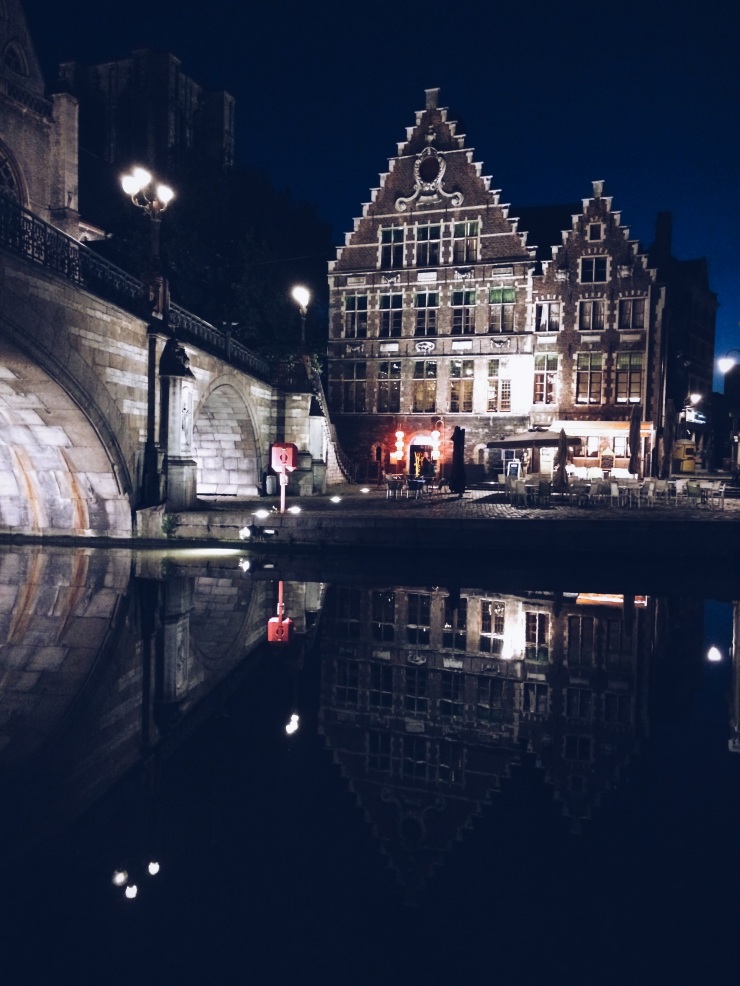 What else is there to see in Ghent? Plenty!

I would recommend a visit to the Gravensteen Castle, which means “Castle of the Counts” in Flemish.

The castle was built by Philip of Alsace, count of Flanders, in 1180 after his return from the Second Crusade. It was modelled after the crusaders castles he saw in Syria and is surrounded by a moat. 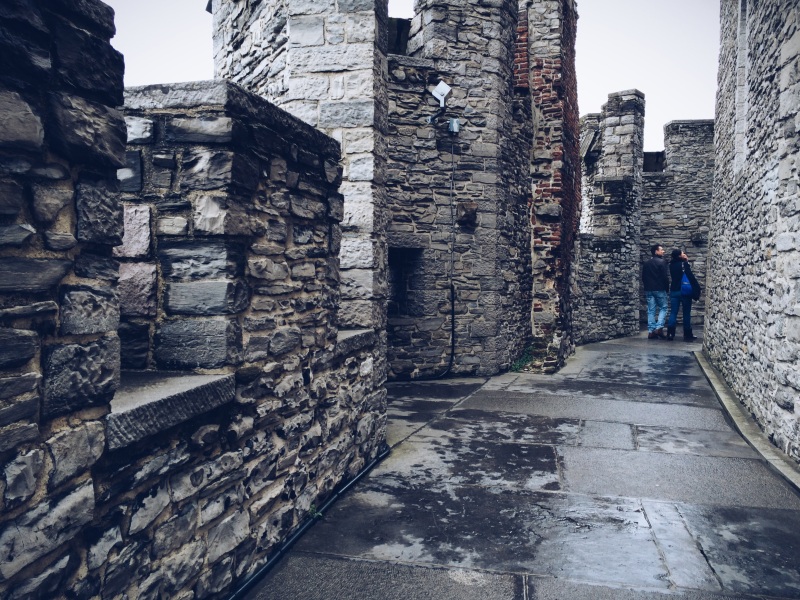 Within this imposing fortress, which was the seat of the Counts of Flanders. were underground dungeons where criminals and victims were subjected to terrifying torture. You can see the instruments that were used to carry out the gruesome acts in one of rooms in the castle. Just reading about some of the torture equipment made me cringe – how did anyone come up with such horrible ideas?!

By the 18th century, the castle had lost its function as an administrative centre. Some of the buildings were sold and parts were used as a mill and living quarters for its workers.

In the late 19th century, the castle was to be demolished. While this didn’t materialise, the castle was dismantled – everything that was not made from Tournai limestone was destroyed. It was then reconstructed according to ancient drawings in 1893.

Some people say that the castle is not authentic since it has been re-built. I don’t think that the reconstruction is an issue and appreciate having the opportunity to walk through the renewed castle grounds as well as climb to the top where impressive panoramic views of Ghent await. 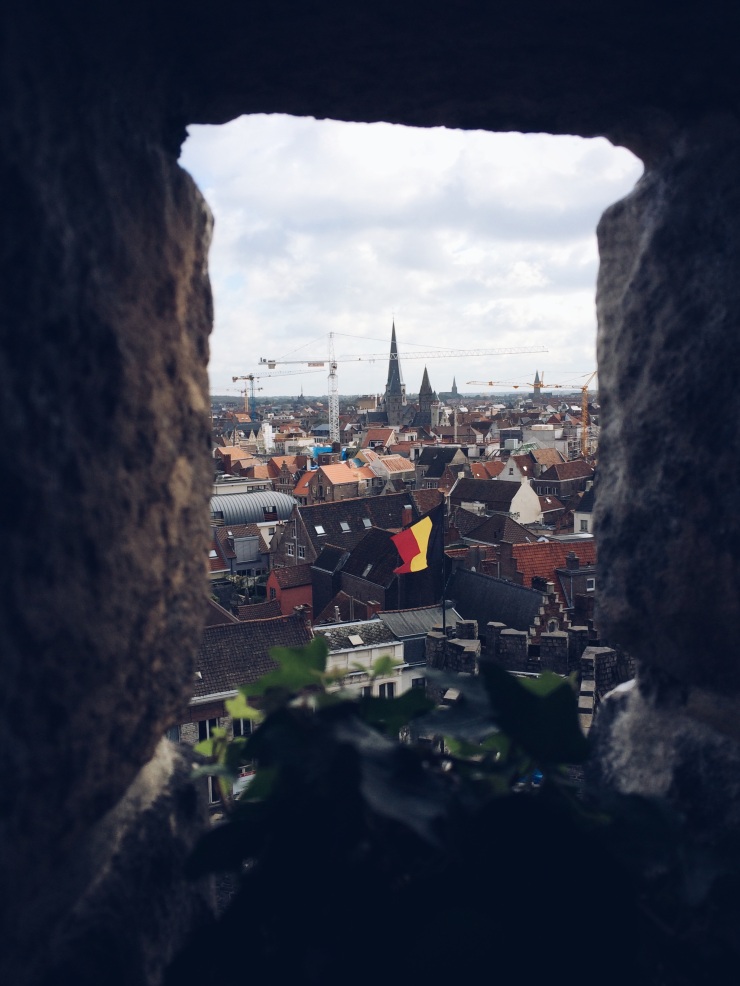 (Side note: Visitors to the castle are provided with a “tour” by two historical figures – Chrétien de Troyes, a novelist, and Simon Saphir, a wealthy patron of the arts. The audiovisual guide merges history with a fictional story. I found it rather odd at the beginning but it turned out to be quite entertaining and informative.)

Another popular tourist attraction in Ghent is Sint-Baafskathedraal (St. Bavo’s Cathedral), where Jan van Eyck’s Adoration of the Mystic Lamb is housed.

Painted in 1432, the famed altarpiece has a storied history.

According to an article in The Guardian: “Just about everything bad that could happen to a painting has happened to Hubert and Jan van Eyck’s Adoration of the Mystic Lamb… It’s almost been destroyed in a fire, was nearly burned by rioting Calvinists, it’s been forged, pillaged, dismembered, censored, stolen by Napoleon, hunted in the first world war, sold by a renegade cleric, then stolen repeatedly during the second world war, before being rescued by The Monuments Men…”

The masterpiece is currently undergoing a seven-year restoration in phases until 2019. Click here to see the details of the Adoration of the Mystic Lamb.

We didn’t get to see the Mystic Lamb as we had arrived too late in the afternoon. Instead, we walked around the church and explored the expansive crypt – the latter is all that remains of the original Romanesque church.

Someone told me: “You haven’t been to Ghent if you’ve not seen the Mystic Lamb.” I guess I’ll have to return to Ghent!

Because there’s plenty to see and do in Ghent, I have a third post in the making. This time, it would be for the foodies 🙂

7 replies on “Discover Ghent and its throbbing medieval heart”