Recently I was thinking of a series of photographs that I took in Hong Kong of residential buildings across the street from the hostel room where AB and I were staying.

After prying open the window, I had double-coiled my camera strap around my wrist and squeezed my Canon SLR camera pass the metal grill to take the photos. All that while, holding my breath and my hands steady to prevent any camera shake, but mainly because I was afraid that my camera would slip from my hands, free-fall 12 storeys and smash into smithereens, or worse yet, kill someone.

With the 35mm lens, I was able to capture a wide-enough perspective containing the elements that characterise the high-density housing buildings in Hong Kong. The featured photo – which is one of my favourite shots of Hong Kong – is a combination of two images taken that night.

If you look closely at the middle of this picture, you would see two human figures in a lit apartment. The man is seated and half-clothed, revealing his middle-age belly, and standing next to him is a woman, presumably his wife. It looks like they were either about to start dinner or had just finished eating. The outline of a bed frame in the same room confuses me a little. Then again, it would not be surprising if their sleeping and dining areas were one and the same as apartments in Hong Kong are infamous for their cramped quarters.

At one point, I wondered if I would have zoomed in on them if I had a telephoto lens with me. The answer is no. Partly because it would have been too intrusive. I would also rather preserve the anonymity and ambiguity of the situation, presenting this as part of a wider context – that of living in Hong Kong’s high-density apartments.

There are other people who are less, or not, concerned with the privacy of their neighbours and have used a telephoto lens to capture them without their permission. For instance, there is Michael Wolf who produced his “Window Watching” series by peeping into the apartments of Hong Kong residents. Arne Svenson was sued by his neighbours in New York after they recognised their children in “The Neighbors” exhibition at a nearby gallery (he won the court case under his First Amendment rights).

Where does one draw the line between voyeurism and art?

I rather like Svenson’s work in “The Neighbours” for how he has rendered banal activities into something quite beautiful and poetic. In these quiet observations of everyday life, the faces of the individuals are often either obstructed or out of view and thus do not outrightly identify them.

Some of Svenson’s photos remind me of paintings by Johannes Vermeer and Edward Hopper. For the fun of it, I’ve created the diptychs below, purposely matching similar images. 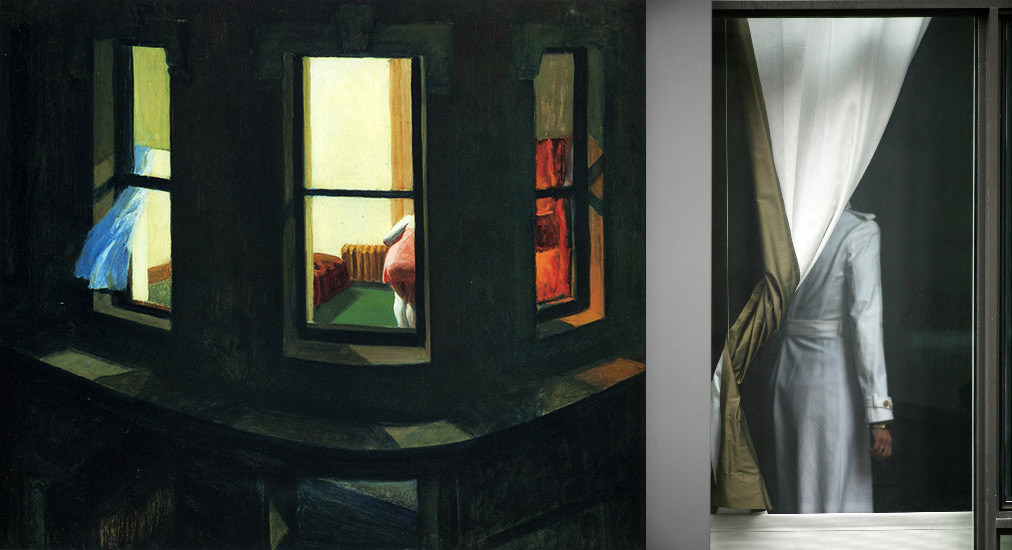 The first features Edward Hoppers’ “Night Windows” and the second, “The Lacemaker” by Vermeer.

How would you feel if you were in the shoes of these neighbours? If someone secretly photographes you in your home in the name of art, would you feel violated?

By the way, the title of this blog post “Facing Windows” was inspired by the excellent Italian movie “La Finestra di Fronte”.

Starring Giovanna Mezzogiorno, the 2003 film revolves around a young married woman whose life changed after she encountered an elderly amnesiac man (Massimo Girotti) and in turn, met the handsome neighbour (Raoul Bova) who lives in the apartment across from hers. There’s romance and love, seduction, finding oneself, realising one’s dreams, as well as voyeurism as Mezzogiorno and Bova secretly observe each other through opposite windows.

One of my all-time favourite movie quotes is from this movie:
Don’t be content to merely survive, you must demand to live in a better world
Non si accontenti di sopravvivere, lei deve pretendere di vivere in un mondo migliore, non soltanto sognarlo

For more articles surrounding or discussing Svenson’s work in The Neighbours:

Leave a Reply to Hannah in Iceland Cancel reply