Ah, the familiar cry of yet another African man selling roasted corn. Always in winter, always right outside the Quick fast food restaurant that is above the Belleville metro station.

Sometimes, there are up to three or four of them at that busy corner where rue de Belleville cuts through Boulevard de la Villette and Boulevard de Belleville. Often, there is also someone selling roasted chestnuts. And all of them will be hawking their goods over makeshift grills, fitted snuggly into a shopping trolley.

Straddling the 10th, 11th, 19th and 20th arrondissements, Belleville is my favourite neighbourhood in the City of Light. It’s somewhat chaotic and always bursting with energy with a constant stream of people – Chinese, Indian, African, Chinese, European, Algerian. The repetition of “Chinese” is not an error. After all, Belleville is the second-largest Chinatown in Paris, after the main one in the 13th arrondissement.

Many of the Chinese residents in Belleville are from Wenzhou in Zhejiang province in China. Starting in the 1980s, there was a rapid increase in the number of immigrants from Wenzhou to France, with most of them setting up homes in Belleville. While the buildings in the neighbourhood look no different from those in a working-class neighbourhood in Paris, the people who live, work and play here are mostly Chinese, blending into a colourful melting pot with other migrant communities from north Africa, sub-Sahara, Armenia, Vietnam, etc. 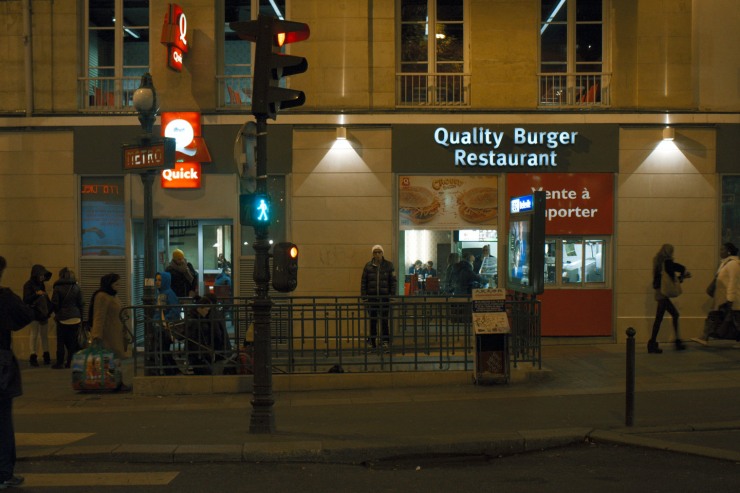 Belleville is where I’d go whenever I’m in Paris for Chinese jiaozi 饺子 (dumplings), Cantonese roast meat, and Want Want 旺旺 rice crackers, just to name a few cravings. You can buy almost anything under the sun here – just enter one of the Chinese shops!

There are also many typical French cafés, including the always-crowded Aux Folies, the laid-back Café Chéri(e), as well as Le Zorba, where the perennial drunks mingle amongst the young, bourgeois-bohèmes (better known as ‘bobo’) crowd under its neon pink lights.

Some of my favourite Parisian restaurants are in Belleville, including the excellent Le Baratin and Au Rouleau de Printemps, where I go every time I’m in Paris for their vermicelle de riz avec nems végétariens (rice noodles with deep-fried vegetarian spring rolls served over a generous portion of shredded vegetables).

Here is also where you’ll enjoy one of the best views of Paris at Parc de Belleville.

8 replies on “Belleville, my Parisian Chinatown”