Earlier today I was going through some photos of scanned negatives that had unfortunately deteriorated as they were not stored in air-tight conditions in humid Singapore. Most of the scanned images taken in the 1980s appear yellowed and/or with white streaks running all over.

While browsing through them, I spotted a double-exposed image of me at the zoo. 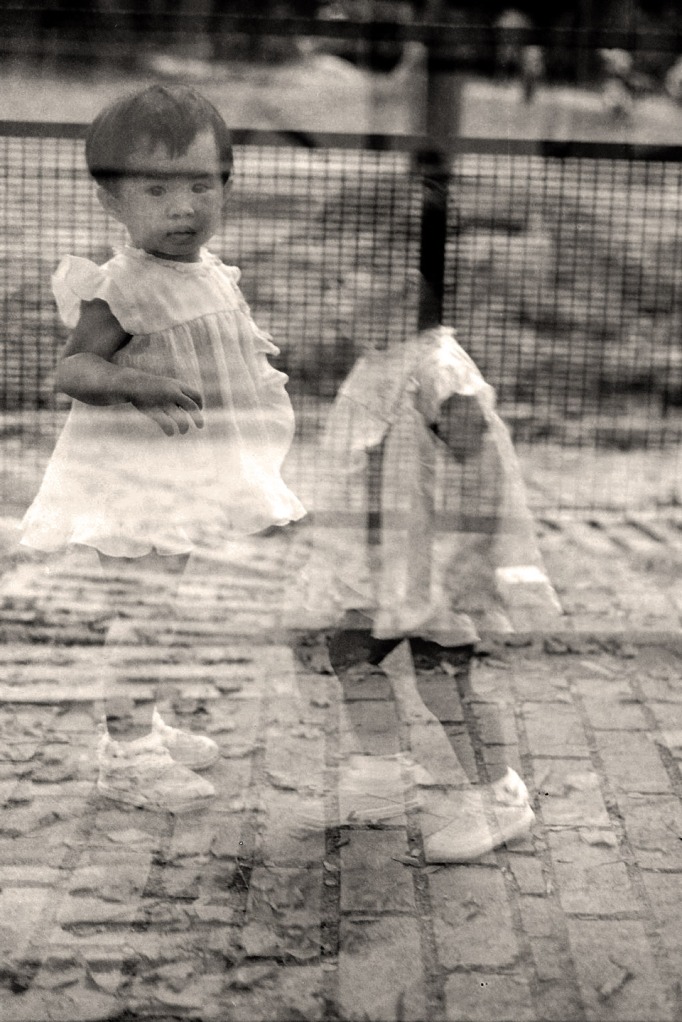 I hadn’t noticed this picture before and like very much how the two images have come together. I wasn’t able to correct the colours to my satisfaction, so have rendered the image in black and white with a slightly warm overlay instead.

While working on this image, I started thinking about twins and how their identity, especially identical ones, are so closely intertwined together. What is it like for twins to create an individual identity for themselves, as well as to manage a collective one together?

One thought let to another… why do some parents choose to dress their twin babies and children in the same clothes? How we dress, as well as how we were dressed by our parents or caretakers, is integral to the development and communication of our identities.

Here is an interesting study that examines twinship as a social identity and how this is influenced by parent–child relations as well as by the twins themselves.

This reminded me of two photos that I took earlier this year while walking around Paris and testing AB’s Voigtlander Bessa rangefinder. One of the first images I took that day was of two middle-aged ladies waiting for the bus. While I couldn’t see their faces clearly from across the road, I was struck by how identically dressed they were from head to toe, including even their spectacles and the duffle bags that they were carrying.

Were they twins? While it’s common to see young twins dressed alike, it is unusual to see adult twins dressed identical to each other. Or could they be headed for work in their uniform??

Later in the day, I noticed a pair of young boys by the pond at Jardin de Tuileries, one of them taking photos of a group of African youths sitting by the water. I had thought that they were twins at first sight as they were wearing similar parkas.

It was only when I was looking at the scanned image from the negative that I realise that they were not twins as one of them is significantly taller, and presumably older, than the other boy. What’s interesting is that the mother was wearing a similar parka to her boys, which shows how parents, especially mothers, can influence the physical identity of their children – a point that is highlighted in the above-mentioned study.

Some months back, I read The Twin by Gerbrand Bakker. Translated from Dutch, the story revolves around Helmer, one half of a pair of identical twins who left school to help out at the family farm after his brother, Henk, died in a car accident.

Not only does Helmer takes over the farm, albeit reluctantly, he is also the sole caretaker of his ailing father with whom he has an awkward relationship. Year after year, season after season, Helmer’s life on the farm passed uneventfully.

Like in Bakker’s other novel, The Detour – which I enjoyed and reviewed here, the life of its lonely protagonist is disrupted, in a good way, by the unexpected arrival of a young man. His past comes back to him, including missed opportunities that are slowly unveiled.

This excerpt from the book – when he recalled his weekly visits to his grandfather at an old people’s home – represents this sentiment well:

While the English title portrays the situation that Helmer is in, I think that the original title in Dutch, Boven is het stil (literally, It’s still upstairs) would have been more poignant. Like with The Detour, I don’t like the cover of the English edition of The Twin. I would have gone with an image of the lifeless room that Helmer had put his father in, focusing on the pair of mandarins on the bedside cabinet with a window looking out to to the farm or field.

Overall, this was an interesting read – though the pace was a little too slow for me, with an unexpected ending when Helmer decides what to do with his life after all.

12 replies on “Gerbrand Bakker: The Twin”