Some years back, I came across a photo of a tiny village in the mountains that was taken on a misty day and I was immediately captivated. The caption read “Asturias, Picos de Europa”. I cut the page from the magazine and put it into my folder for travel ideas.

The Picos de Europa – with its precipitous limestone peaks juxtaposed against tranquil green meadows, and little stone cottage villages that seem lost in time as cow bells ring in the distance – was everything I imagined it to be, and more. When not feeling car-sick while travelling on the winding mountain roads, I was going “wow” at almost every turn. It was so beautiful, truly breathtaking.

What I did not expect when I was in Asturias was how gorgeous the coastline and the beaches are.

You see, I didn’t research much for this trip, aside from getting a copy of the excellent Walking in Picos de Europa guide (which I barely read and left it to AB to lead the way on the hike), finding interesting accommodations on Airbnb.com, and translating (via Google) the recommendations that VV, a Spanish journalist shared with me for Llanes.

It was only on the last afternoon of our stay that we made it to Playa de Torimbia. This was because the place that we had rented in Llanes was so nice that we spent most of our time just hanging out in the deck in the garden, reading, drinking cider / Rioja red wine, making gazpacho and barbecue! 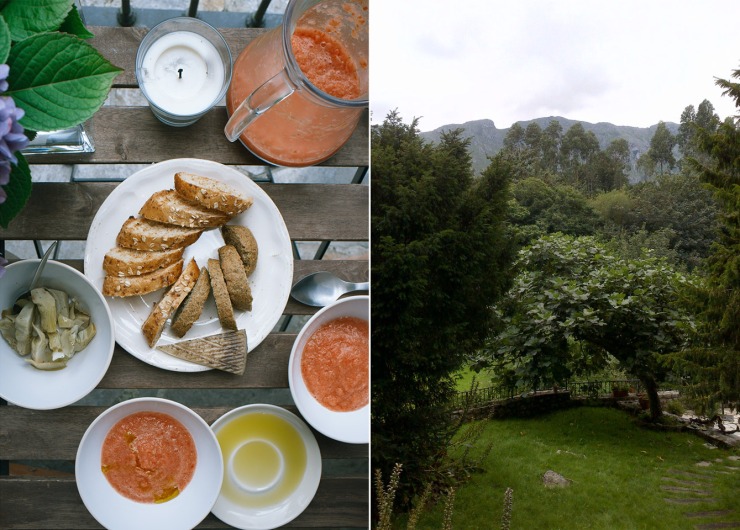 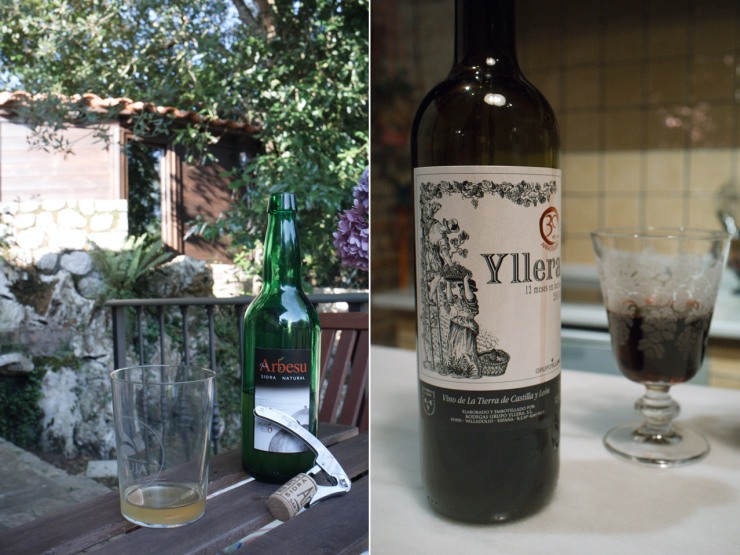 Back to the day at the beach…

After driving carefully through Andrín, we emerged on top of the town and followed the road up to a spot where cars were parked on an asphalt path on the edge of a hill. While looking for a parking spot, I spotted a good-looking, muscular, tanned, and completely naked guy standing by his car. I think my eyes popped and my jaw dropped before I decided to look away (it was the first time that I saw a stranger man naked in person). I couldn’t stop grinning for the next couple of minutes!

The weather was perfect for hanging out at the beach. Clear skies + cool breeze + sunshine. We walked along the elevated trail which curved around Playa de Torimbia, taking in the wonderful views of the sea and beach.

As I was taking this photo, AB asked, “Does it look to you like there are people with no clothes on?” I squinted, focusing on the tiny ant-like figures lying on the beach. He was right. This is a nudist beach! 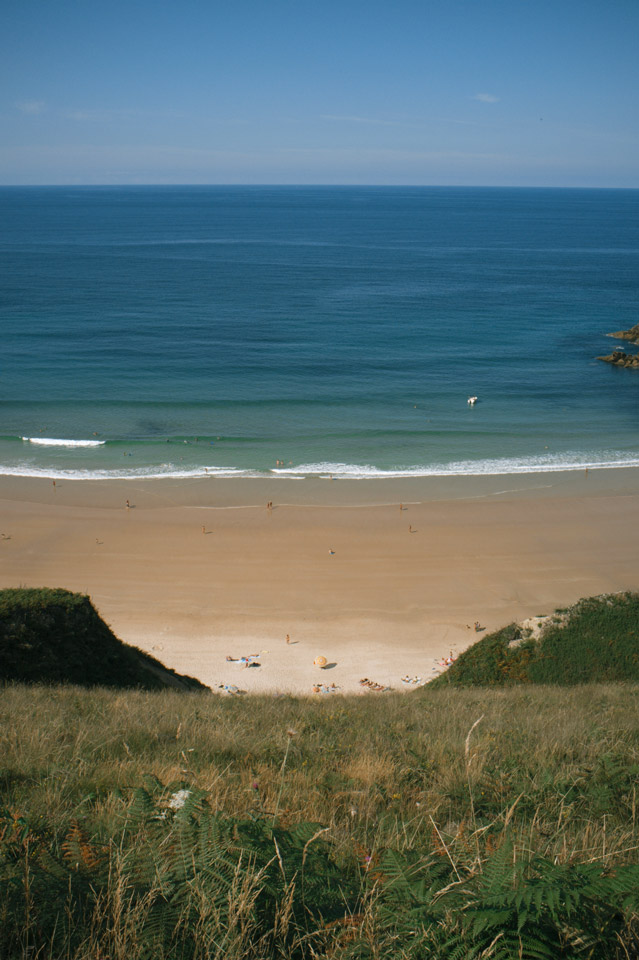 So I duly put away my camera as we continued to walk to the headland at the other end of the bay. The views were amazing! I especially liked looking down the edge, watching the waves splash onto the jagged rocks. 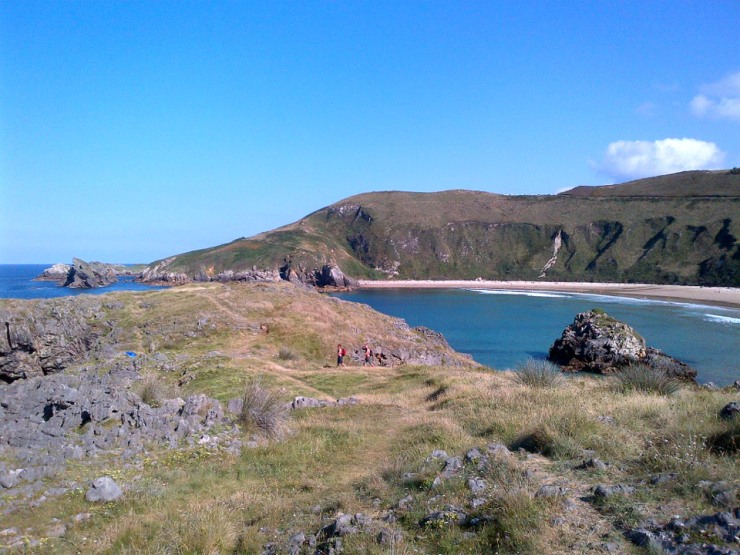 I didn’t have a bathing suit with me. But it was so inviting to lie on the long soft grass on the headland… So we dropped our clothes and laid on the ground. It was already late in the afternoon, so it wasn’t like we were going to get tanned. Nonetheless, it felt so good to feel the cool sea breeze and the sun’s warmth on my skin, to listen to the waves, and not do anything and just relax. 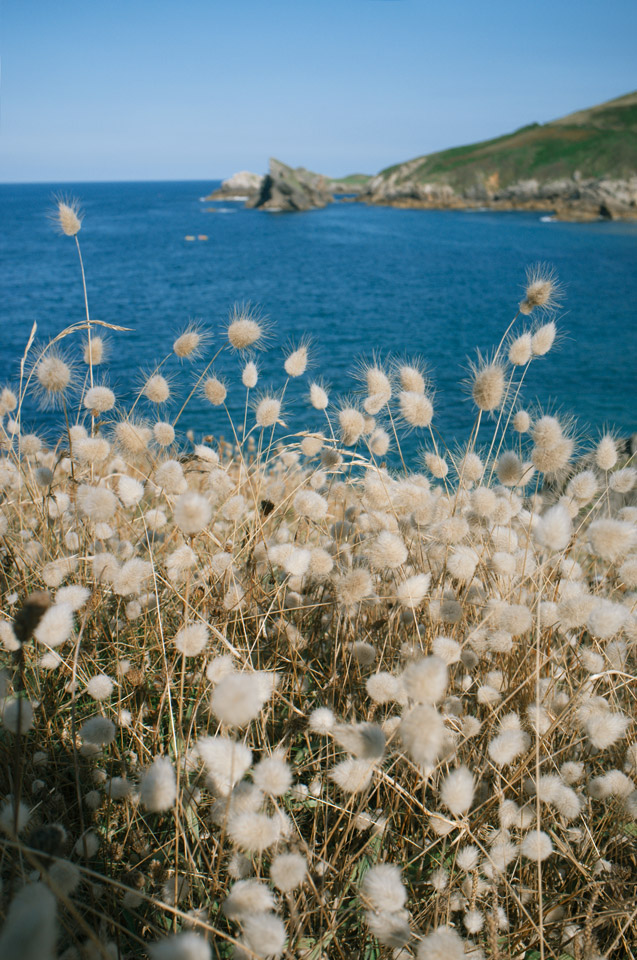 After more than an hour of sleeping/lying in the sun, we put back on our clothes and took a walk by the beach. Many people, including couples, small groups of friends and families with small children, were playing in the waters or lying on the beach with no clothes on. It’s nice that everyone minded their own business and you could freely enjoy yourself in the nude. Very liberating!

Upon reaching the other end of Playa de Torimbia, we continued along the coast, passing the non-nudist Playa de Niembro, before climbing our way through Andrín town (this time, on foot) to get back to the car. Instead of driving down the way we came right away, we decided to check out where the rest of the asphalt road leads to. After a slightly bumpy ride past grazing sheep, we ended up a viewing point at San Antolin.

There were two picnic tables set at the edge, looking out to the horizon. WOW. One could not have asked for a better way to end this beautiful day at the beach.