When I travel, I usually take only a few pictures of renowned monuments and buildings as there are already many great images that others have captured of these places before I. Unless I find something particularly different or interesting, I rather spend my time wandering around and taking in the ambiance. This was what happened when we visited the famous Antwerp Central Station in April.

I had taken a handful of photos and only started to review them recently. Two images stood out and I like how symmetric these have turned out. I cropped the images very slightly in Photoshop but the actions of the people who appeared in the middle of both photos were chance moments. 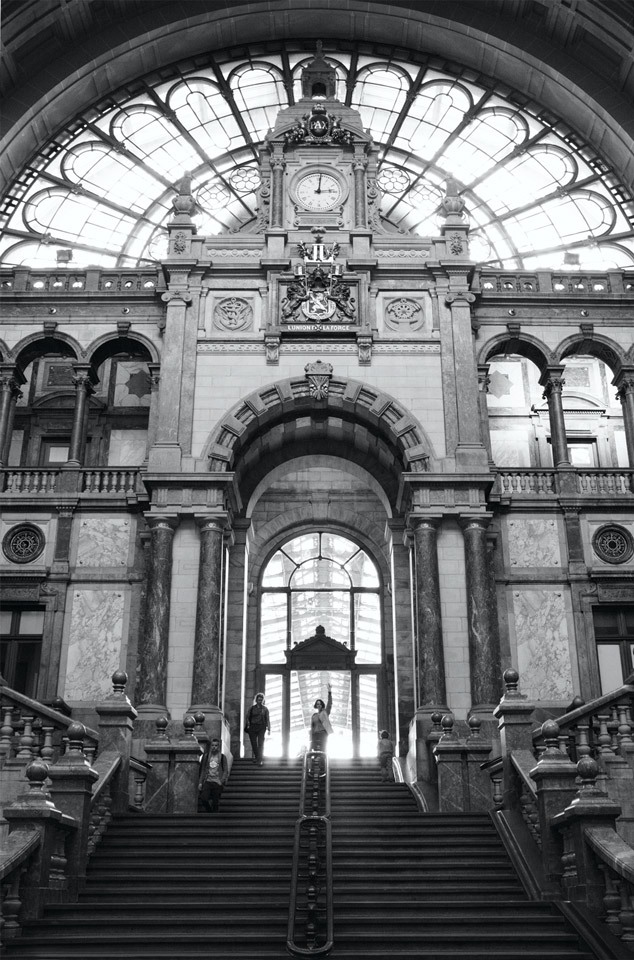 Built in the late 19th century, the architecture is impressive and rather eclectic: Louis Delacenserie designed the terminus buildings, which include an immense dome above the waiting room hall, which are primarily in Neo-Renaissance style with Art Nouveau accents. The Gothic-style iron and glass arched ceiling was designed by Clement van Bogaert. Local designer, Jan Van Asperen, drew the blueprint for the railway viaduct.

What I found equally fascinating was that the train station has three (!) levels of rail tracks. The tracks on the lower floors (-1 and -2) were constructed in more recent times for high-speed trains to travel through Antwerp Central when travelling between Amsterdam and Brussels, and also to accommodate the larger amount of traffic terminating at the station.

It was interesting to learn that the train station was almost demolished in the 1970s. Fortunately, this never happened and the decision was made to restore it  instead!

If you’re interested to learn more about the history, architecture and restoration of the Antwerp Train Station, visit this page.