I was in Paris over the weekend, mainly for les soldes d’hiver (winter sales). While I didn’t buy anything particularly noteworthy that was on sale except for some Princess Tam Tam lingerie, I had a most wonderful time catching up with friends – two of whom surprised me with their pregnant bellies, as well as walking all over Paris with AB and relaxing in his cosy 15m² studio.

I returned to Paris tonight and the train took almost two hours, instead of the usual 1h20, to get to Brussels as it had to reduce its speed due to the snowfall. By the time I got home, I was feeling rather hungry and was contemplating to break open a packet of gaufrettes de caramel (thin slices of crisp waffles with caramel sandwiched in between).

Fortunately a sack of sprouting potatoes caught my eye as I was putting away some things in the kitchen. My first thought: “Damn! How ever am I supposed to finish all these potatoes by Friday?” (since I’m leaving on Saturday for two weeks in Asia)

My second thought: “Hmm, I could make some stoemp with the half-broccoli that I brought to AB’s place last week and brought back home to Brussels as we didn’t use it!”

And that’s what I did.

Stoemp has got to be one of the easiest foods to prepare. After all, it’s just mashed potatoes and vegetables.

All you have to do is boil some water and add potatoes (I leave the skins on) when the water is boiling. Then add your chosen vegetable later so that it doesn’t become overcooked. You can use broccoli, green beans, carrots, leeks, etc. Stoemp is a great way of using up extra vegetables, as well as to trick fussy little children into eating their veggies!

I’d suggest a vegetable:potato ratio of 1:2. Once everything is cooked – poke the potatoes with a fork to see if they are tender, mash everything together and add salt, pepper and butter (or olive oil) to taste. 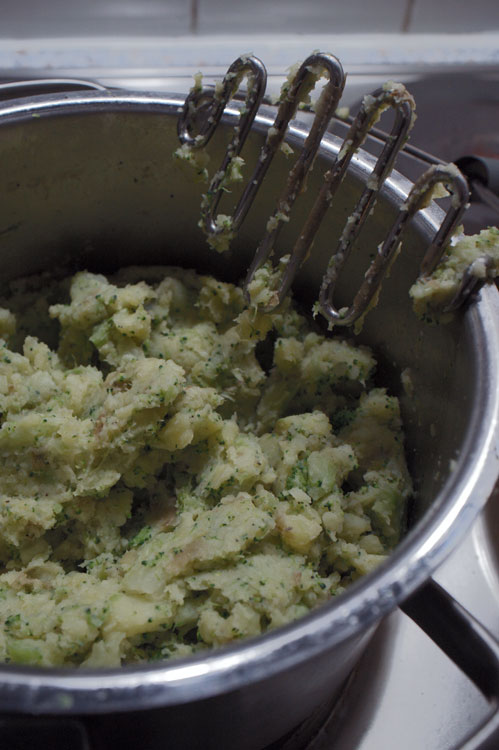 Maybe because I was hungry or maybe because it was freshly cooked and hot while it was snowing heavily outside… tonight’s stoemp tasted so good, leaving me with a warm feeling of satisfaction!

Reading the French Wikipedia article on stoemp while eating a second serving, I wonder if this is also how the peasants and working class folks felt when they ate this traditional Flemish dish alongside rabbit stews or greasy sausages on cold evenings during the 19th century.

An interesting note on the etymology of “stoemp”: The name came from the Flemish, who called it “doorgestoempde patatjes”, which literally means “crushed potatoes”.

As for the leftover stoemp, I’ll probably eat some as a side dish and use the rest to make oven-baked tuna croquettes (which, by the way, are really easy to prepare too)!