Before I moved to Brussels, I spent a sabbatical year in Paris during which I learnt to cook and edit photos in Photoshop, went for French classes and diligently did my homework, as well as explored the city on foot almost every other day. Quel plaisir!

Paris is a city that is made for walking and is the place to perfect l’art de flâner, the French way of strolling.

I could walk for hours around the city and not be bored. There’s always something to be discovered, if you just keep your eyes open. Some people will tell you that Paris is dirty and there’s lot of dog poop on the pavement. Which is absolutely true… all the more you should keep your eyes open when walking around Paris!

One fine day in August, I was walking home – which was somewhere between République and Belleville in the 10th arrondissement – from the Opéra district. This is not something I’d normally do as it’s rather long – around 3.5km according to GoogleMaps if you stay on the big boulevards. But I was in no hurry and the streets were very empty as almost 50% of Parisiens were out of town for their annual summer holidays, so I just walked somewhat randomly in the direction of home.

I have a habit of checking my reflection in the shop windows. On this day, I must have done this over a hundred times. At one point, a pot of petit pois dans un vitrine (green peas on display) caught my attention as it seemed like a peculiar choice to exhibit in one’s shop window.

Upon taking a closer look, I realised that these were in fact candy disguised as green peas. How odd! Do little children prefer eating green peas to sweets?

What is this place? Turns out that it is none other than the flagship store of A la Mère de la Famille. Candy heaven! 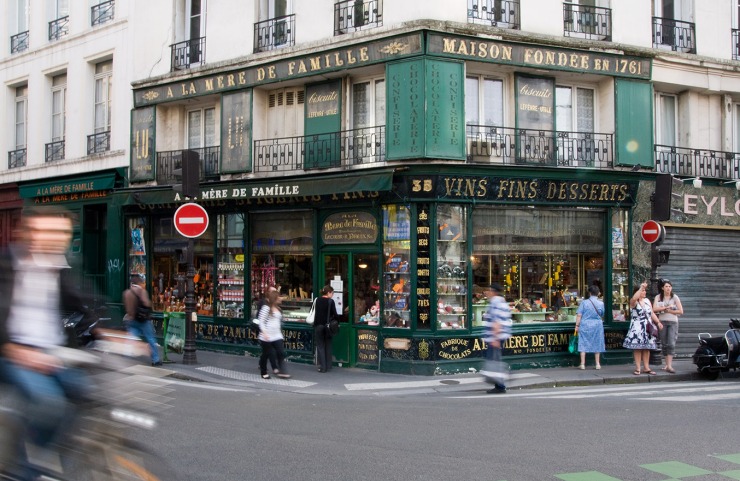 It was here – 35, rue du Faubourg Montmartre – where a certain Monsieur PJ Bernard started La Maison Bernard in 1761, selling spices. Through the years, the shop’s name changed to what it is today. It also became one of the best chocolatiers and sweet shops in Paris.

Stepping into the charming old-fashioned interiors of A la Mère de la Famille, I felt like I had discovered a treasure… of chocolates, caramels, calissons, candied fruits, ice-cream and jams!

I didn’t take any photos of the interiors. Don’t want to spoil the surprise for you : )