We spent most of yesterday browsing comics, better known as “bande dessinées“ or “BDs” in France and Francophone Brussels, as AB wanted to check out “Les Cités Obscures“.

Illustrated by François Schuiten and written by Benoit Peeters, “Les Cités Obscures” is a series of graphic novels depicting a parallel universe to Earth. The series features independent city-states – imagine a continent comprising several Singapore-like entities – with their own civilisations and distinct architectural styles.

This includes Urbicande, whose orderly southern Art Deco metropolis is suddenly and irrevocably connected to its chaotic northern half by the growth of a mysterious cube. 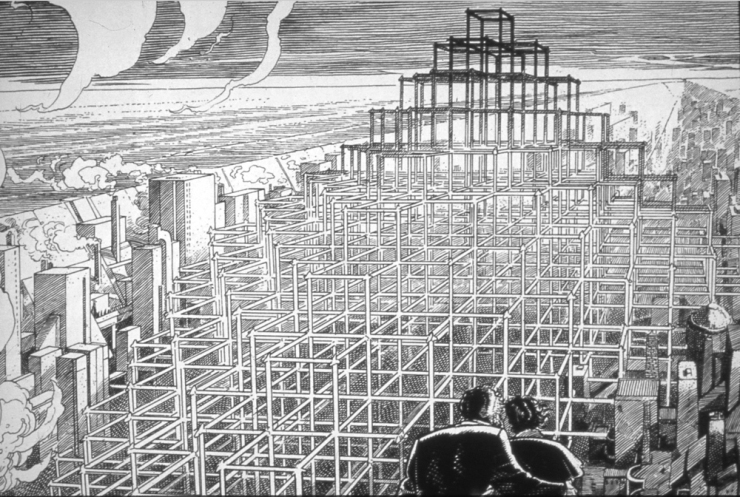 After looking at some of these drawings, I was reminded of the excellent Art Deco exhibition, “1925: Quand l’art déco séduit le monde” (1925: When art deco dazzled the world), that I saw at the Cité de l’Architecture and du Patrimoine in Paris last December.

Upon entering the museum, I was immediately drawn to an alluring mural, “La Vigne et le Vin” (The vineyard and the wine), that was hanging prominently in the main hall. Jean Dupas was commissioned to produce this immense oil painting for the Bordeaux pavillion, one of four towers dedicated to showcasing French wines during the 1925 expo.

The exhibition is organised in a thematic series that highlights the origins and influence of the Art Deco movement in the worlds of architecture, art, fashion and transportation, alongside an extensive display of furniture, blueprints and photographs.

I wasn’t particularly interested in the objets d’art in the grands magasins section of the 1925 expo. But here are some lovely images from the expo that I really liked:

A huge focus of the exhibition is on the impact of Art Deco on the construction and design of buildings, from cinemas to grands magasins (department stores), as well as the interiors of restaurants and cafes.

Following the 1925 expo, Art Deco made its way across the Atlantic and around the world, led by a group of predominantly French architects and designers such as:

Paul Landowski, who created the Christ the Redeemer statue in Rio de Janeiro, Brazil and was also a gold medalist in the 1928 Summer Olympics for Sculpture, a competitive event at the Games from 1912-1952!

Paul Moncet was one of the architects of the distinctive train station in Dalat that incorporates the characteristic high, pointed roofs of the Cao Nguyen buildings of ethnic minorities from Vietnam’s Central Highlands while taking inspiration from the Art Deco-style train station in Deauville, France.

Roger-Henri Expert was commissioned to design the French embassy in Belgrade, Serbia – which is presented at the exhibition in a striking backlit photo.

There was also Jacques Carlu  – who is most famous for designing the Palais de Chaillot. He was commissioned to design “Le 9e” restaurant in Montreal’s former Eaton’s Department Store. A popular social spot, Le 9e was officially classified as a Quebec heritage site in 2000 following its unfortunate closure after Eaton’s went bust.

Below is a close-up of an illustration of the restaurant which doesn’t show the grandeur of the venue. For more images, click here.

While researching for this post, I found a thesis that focuses on Le 9e, which I found quite informative, especially if you’re interested in its design, which was influenced by the Art Deco movement and intended to recreate the atmosphere of being on an ocean liner. See page 30 onwards for a more in-depth description of the restaurant’s design.

Palais Flottants de l’Art Déco // Floating Art Deco Palaces
The design inspiration for Le 9e stemmed from that of the Ile-de-France, for which Carlu was one of the designers.

One of the most famous paquebots (ocean liners) that plied the Atlantic between Le Havre in France and New York, Ile-de-France was the first major liner to be built after WWI. It was entirely decorated in Art Deco style, the first of its kind, making it a floating Art Deco palace where one would be transported into a temporal universe of luxury, glamour and refined elegance.

Here’s a black-and-white video made by one of the voyageurs onboard Ile-de-France.

Even more fascinating is this documentary featuring what is probably the only colour video footage of Normandie. This is mostly based on the footage captured by Jean Vivié, an employee of Compagnie Générale Transatlantique (which built Ile-de-France and Normandie), as well as narration based on a diary that he kept while onboard as a first-class passenger together with his wife in 1939.

The documentary provides many interesting insights into what life was like onboard such luxury hotels on water. While watching scenes of the guests at the restaurant and grand salon, I was wondering how the women managed to maintain their immaculate hair-dos. Well, turns out that there were all kinds of services and facilities onboard the Normandie, including a hair salon where you could get your “hair shampooed in distilled water from New York”!

I thought this description by Vivié’s son summarises perfectly what it must have been like to set sail and travel across the ocean in such impressive cruise ships:

“For many people, the Normandie was a legend. But for my parents, it was much more. It was their ocean liner, a boat where they had experienced this truly extraordinary journey.”

It was also fun to see the streets of New York through the eyes of Vivié, as he made notes about the soon-to-be-completed Rockefeller Center and views of the city from on top of the RCA Building. The dramatic and tragic demise of the Normandie – which caught fire while being converted into a war troopship in WWII, is also presented in the documentary.

If you have not had the chance to see it, the overview (in French) on the museum’s website is an informative read. Better yet, get a copy of the catalogue at the bookstore.

6 replies on “1925: When Art Déco Dazzled the World + Floating Palaces of Art Déco”