Unlock Art: Where are the women in art? is the latest in a series of eight short films that has been keeping me busy at work. Produced by Tate in partnership with Le Méridien Hotels & Resorts, the  Unlock Art film series was conceived to make visual arts more accessible, introducing topics such as the history of the nude, pop art and surrealism in a witty and informative way.

Jemima Kirke of US sitcom Girls is the presenter of Unlock Art film #4, first appearing on screen in a gorilla outfit before delving into the presence, or rather the lack, of women in art.

In this film, Kirke talks about how women artists have always been around but were ignored by art historians, who, no surprise, who were mostly men. A question that beckons is how can art history be re-written to acknowledge these female artists who had been left out of art history and give them the belated tribute for their influence in various art movements?

It’s interesting to see the online conversations that have been sparked by the film in the media such as The Guardian, The Telegraph and on Twitter – e.g. Chelsea Clinton & Lena Dunham of Girls tweeted about the film.

“Where are the women in art?” is my favourite in the Unlock Art series so far. Let’s see if this opinion stands after the remaining four films, including the next one on Nude Art (coming out 14 February).

While the recognition given to women for their role in creating art and influencing art movements leaves much to be desired, there certainly is no lack of female representation in the output of art throughout history.

Here, I would like to throw the spotlight on Félix Vallotton, a Swiss painter and printmaker whose works straddled the 19th and 20th centuries. Vallotton was quite prolific – producing some 1000 paintings, more than 200 woodcuts, hundreds of illustrations and drawings, and he also had a literary side and wrote three novels, 10 plays and 40 essays on art. However, he is not as internationally renowned as the above-mentioned artists.

Last December, I went to the Grand Palais in Paris to see a major Vallotton retrospective, “Le feu sous la glace” (The fire under the ice). I wasn’t quite sure what to expect as I wasn’t familiar with his works but was intrigued by a few paintings that I had seen online. I ended up spending hours viewing the exhibition and enjoyed every moment.

Organised by the Musée d’Orsay and the Grand Palais in Paris, in joint collaboration with the Van Gogh Museum, Amsterdam and the Mitsubishi Ichigokan Museum, Tokyo, the exhibition was divided into 10 thematic sections ranging from le double feminin (female duets) and erotisme glacé (icy eroticism) to idealisme et pureté de la ligne (idealism and purity of line) and un regard photographique (a photographic eye).

I especially enjoyed his paintings and woodcuts in the section of refoulement et mensonage (repression and lies), depicting bourgeois drama taking place behind closed doors and ambiguous relationships with seemingly cold, self-seeking women. I find these images particularly alluring and like how each provokes questions or doubts in the viewers’ minds. 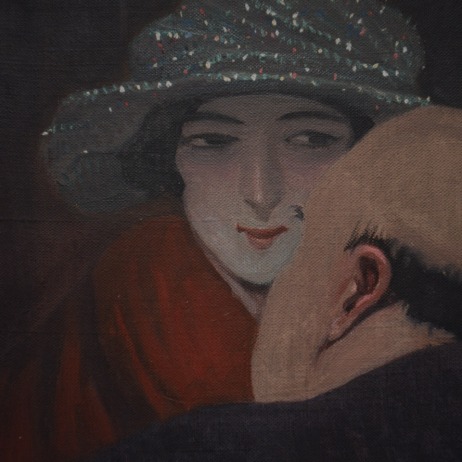 Close-up of La loge de théâtre, le monsieur et la dame (The theatre box seat, the gentleman and the lady) 1909: This was also the cover image for the exhibition catalogue and poster

Vallotton’s works include portraits, nudes, landscapes, still life, as well as mythological and historic paintings. The exhibition presented many nudes by Vallotton, most of which I really liked. Though Julian Barnes might beg to differ!

An interesting comment on Art Life Magazine regarding Vallotton’s nudes:

Before the Internet, there was Playboy Magazine, and before Playboy Magazine, there were painters like Felix Vallotton. Nudes in every variation, to no special aim other than to please the eye, and maybe to provoke conservative furor. Non-explicit pornography is a great oxymoron, yet the description comes to mind in front of these women playing with each other… 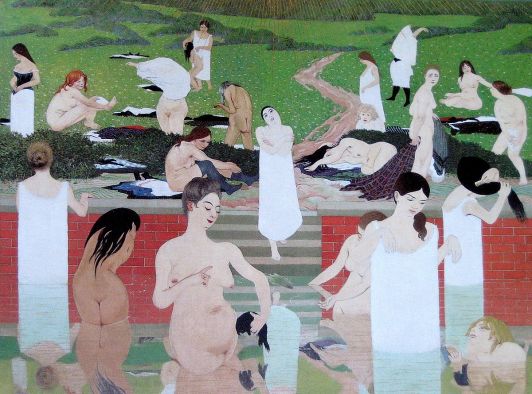 Le bain au soir d’été (The bath summer evening) 1892 / wikipaintings.org: One of Vallotton’s first Nabi-style paintings, this was presented in 1892 at Le Salon des Indépendants and was poorly received by the audience who laughed out loud at the unusual female forms. I find this painting rather intriguing and surreal with its mix of styles.

Close-up of Homme et femme / Le viol (Man and woman / The rape) 1913: This is a powerful and tense image with striking form struck by the two individuals, regardless of whether it is seen up close or from a distance

The influence from Art Deco, post-Impressionism, Symbolism, as well as Japanese prints and modern photography, is evident. He was also inspired by several of his predecessors including Jean Auguste Dominique Ingres, Édouard Manet and Diego Velázquez – can you spot their influence in the slideshow below?

I was impressed with what I saw at the exhibition and decided to buy the catalogue – which is in French, and I’m hoping it would help me practise my French!

While the exhibition has ended in Paris, a smaller version will be presented in Amsterdam’s Van Gogh Museum from 14 February to 1 June and Tokyo’s Mitsubishi Ichigokan Museum from 14 June to 23 September later in the year. If you are in Amsterdam or Tokyo during these dates, I’d recommend to see the Vallotton exhibition.

For more information:
Julian Barnes’ critique in The Guardian
Overview of the 10 themes in the exhibition in Slate.fr
Vallotton’s women (slideshow)
Couples in Vallotton’s works (slideshow)

P.S. Most of the images of Vallotton’s works were taken during the exhibition save for the few that have been indicated otherwise.