With just a few hours before my flight to Shanghai, I decided to get out of the hotel, take the metro two stops to Zhongxiao Dunhua and have lunch at a restaurant (Du Xiao Yue 度小月擔仔麵) that was recommended to me.

After a satisfying lunch – I still have fond memories of the hot, wobbly deep-fried tofu – I walked in circles trying to find VVG Something in a confusing maze of alleys (巷) and lanes (弄) at Zhongxiao East Road. Can someone explain the logic behind these?

Here’s a photo that I took while I was finding my way around. I really like this image of the grandfather carrying his granddaughter with a smile on his face as they passed in front of this interesting collage of window frames. 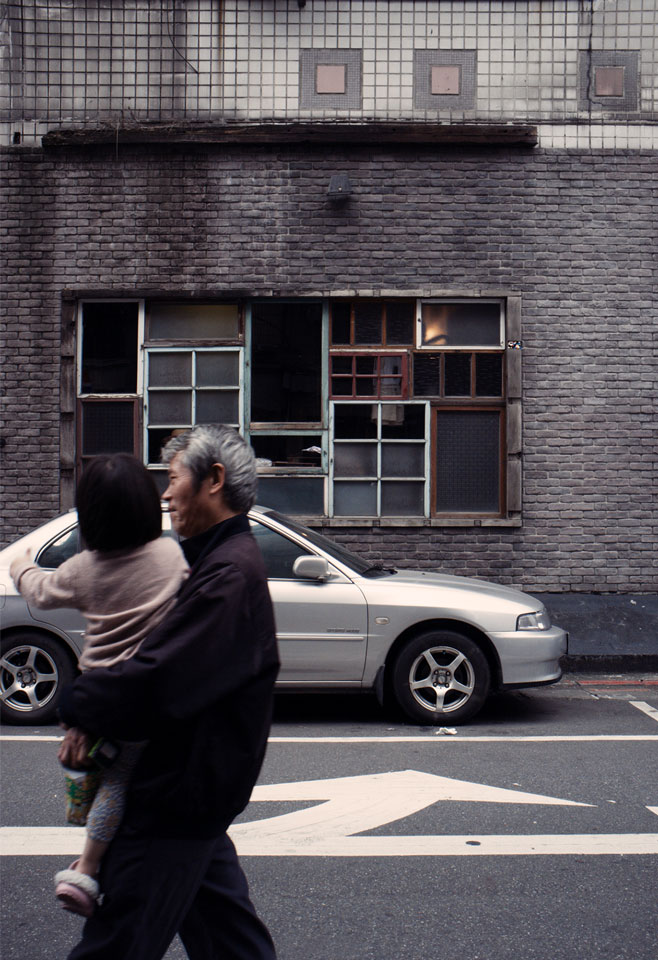 VVG Something (好樣本事) was listed by Flavorwire as one the 20 most beautiful bookstores in the world.  The entrance was bordered with green plants and the warmly lit woody interiors had a soothing ambience. Quite pretty indeed.

VVG Something is not a bookstore in the strictest sense but more of a ‘lifestyle concept shop’ with books in the centre and the walls lined with foreign curios and quirky knick knacks. A little something from here and there. Kind of felt like a nostalgic travel capsule.

I really like the idea behind it but I couldn’t help feeling a little let down. Perhaps my expectations of VVG Something were too lofty – after all, it was in the same list as the gorgeous Livaria Lello in Porto. Or maybe I didn’t like the idea of being ripped off – I bet most of the foreign knick knacks were being sold at several times the original retail price!

The area where VVG Something, as well as the restaurant and café run by the same group Very Very Good, is located reminded me of Marais with its somewhat run-down, aged buildings now occupied by trendy shops and restaurants that attract a crowd that brings to mind Paris’ bobo (bourgeois et bohème) crowd.

Anyway, this is a very superficial observation as I only spent minutes in the area and I may very well be mistaken! I shall have to return to find out more… 下一次吧！