Until a year ago, I knew little about Shenyang. I could vaguely place it in the northeastern corner of China, and I had heard of its pioneering role in the country’s industrial revolution. However I had no idea that its prominence in China’s history goes as far back as the start of the Qing dynasty.

A filming project at work introduced me to Shenyang’s eventful history and rich culture. Intrigued, AB and I visited Shenyang during a multi-city train journey from Hong Kong to Beijing last summer.

We were in Shenyang for only four days, mostly exploring the historical centre and the Tie Xi industrial area (铁西区). There was so much more that we had not seen. After all, Shenyang is one of the largest cities in China.

Shenyang is the capital city of the Liaoning province. It forms the Dongbei region together with the provinces of Jilin and Heilongjiang. Post-WWII, the Dongbei region was at the forefront of China’s industrial revolution, tapping into its rich coal, oil, and iron ore resources. This once-vibrant industrial era is now in the past.

Shenyang was not what I had imagined it to be. I was expecting a city in decline. Similar to the midwestern cities in the United States’ “Rust Belt”. Or something like Charleroi, the Belgian capital of “le pays noir” where we ventured into disused metro stations and cooling towers, climbed a slag heap, and strolled past abandoned factories. But I was wrong.

It was neither grim nor grey. For one, the skies were clear and blue. I was however told that the weather was exceptionally nice. The streets were generally clean and orderly. There were pockets of greenery where people could exercise, dance, or stroll. The city’s modern metro system worked seamlessly and the road traffic flowed smoothly most of the time.  The architecture was a mix of bland modern buildings and shiny towers as well as European and ancient Manchurian styles. 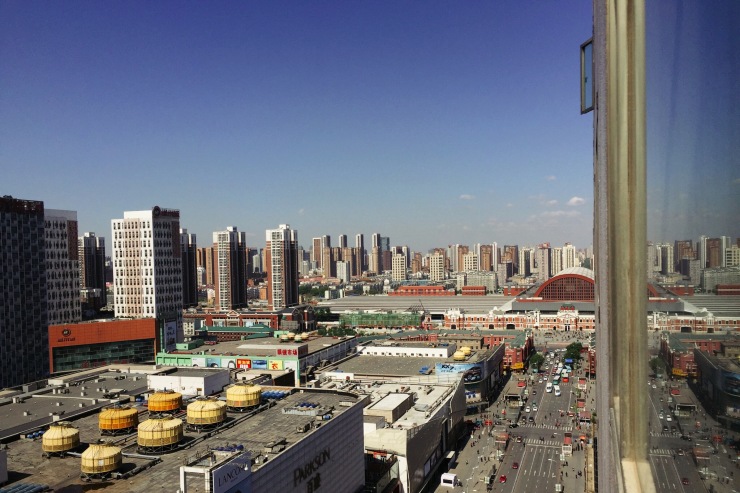 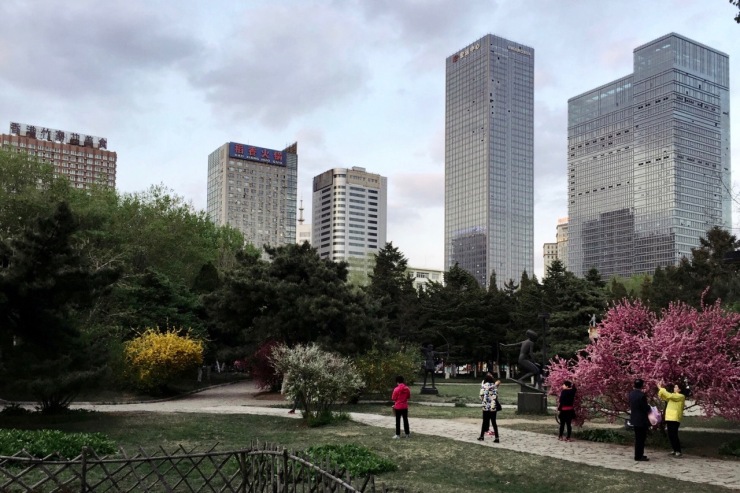 Shenyang was captured by Nurhaci, the founding father of the Manchu-led Qing Dynasty, in the 17th century. The northeastern city was the capital of the Qing Dynasty until 1644 when the Qing forces occupied Beijing and toppled the Ming Dynasty. The Mukden Palace 盛京宫殿 was built in 1625 to rival the Forbidden City in Beijing. Now known as the Shenyang Imperial Palace 沈阳故宫, it is recognised as a UNESCO World Heritage Site together with the Forbidden City.

Smaller than its Beijing counterpart, the Shenyang Imperial Palace comprises 114 buildings. As the imperial palace has been less extensively restored than the Forbidden City, many of the original faded patterns and intricate carvings have not been covered up by fresh paint, showing the passing of time. It was fascinating to see the vertical Manchu script which, to my untrained eyes, reminded me of Arabic script with its swirls and lines. 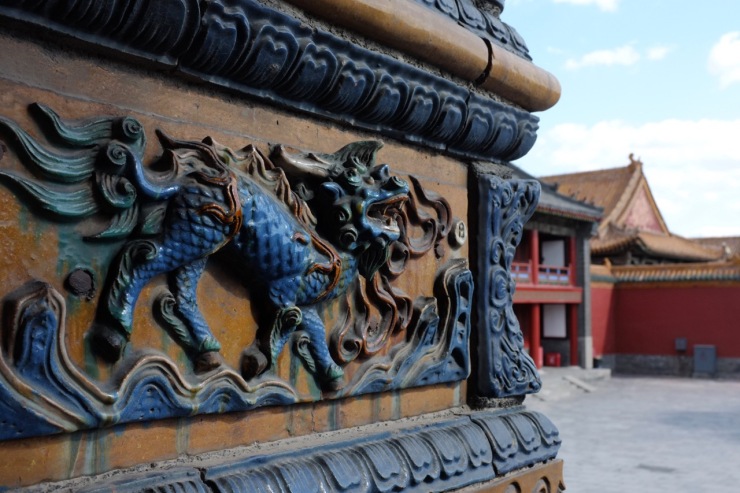 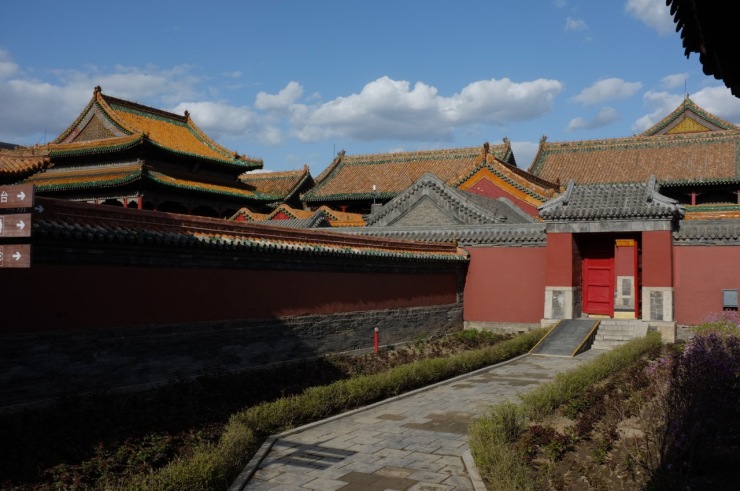 The architecture of the Shenyang Imperial Palace features a mix of Manchu, Han, and Mongolian influences. Similar to the Forbidden Palace, the layout is based on feng shui principles and there are endless courtyards. However there are other areas that reflect the Manchu culture and society. For instance, there are eight pavilions to represent the “eight-banner” system, a social and military structure into which the Manchus were organised. The Manchus practised Shamanism and this is evident in the sacrificial corners within the palace grounds.

Even though the Qing Dynasty capital was moved to Beijing, Shenyang retained great importance. The imperial families would make regular journeys to worship their ancestors as there are three tombs of early Qing Dynasty rulers in Shenyang: Fuling, Zhaoling, and Yongling. These three mausoleums were designated a UNESCO World Heritage Site together with the imperial tombs of the Ming Dynasty.

In the northern part of Shenyang lies the Zhao Mausoleum 昭陵. This is the resting place of Huang Taiji, the first emperor of the Qing Dynasty, and his empress. Surrounded by greenery including more than 2,000 ancient pine trees on the back of the hill, the tomb grounds were remarkably tranquil. I enjoyed strolling along the elevated walls from which I could see modern skyscrapers in the distance.

There are development and height restrictions around the tomb because of its historical significance. For centuries, the area surrounding the Zhao Mausoleum was restricted and only a few people were allowed. This space was opened to the public in 1928 with the creation of the Beiling Park 北陵公园, the largest park in Shenyang.

Spanning over 3 million square metres, the sprawling Beiling Park is a popular gathering spot for local residents. When we were there in summer, there were elderly folks dancing and playing chess, young children running around, and couples enjoying a stroll or paddle ride on the lake.

Shenyang in the early 20th century

Whilst it was interesting to walk around the well-preserved compound and its gardens, what interested us most was the story of the two men.

The senior Zhang was a Manchurian warlord who ruled northeast China and supported the restoration of the Qing dynasty. Zhang Xueliang succeeded his father after the latter was assassinated in 1928. His pivotal role in modern China history came when he arrested his superior, Chiang Kai-shek, the leader of the Nationalist government, to force the latter to unite with the insurgent Chinese Communist Party to fight against Japan which had occupied Manchuria.

The opulent Marshal Zhang’s Mansion survived the Cultural Revolution thanks to the younger Zhang’s status as a national hero for his role in resisting Japanese occupation and advocating a unified China. In spite being widely regarded in China as a patriot, Zhang Xueliang was put under house arrest for over 50 years for capturing Chiang Kai-shek.

Shenyang was at the forefront of Mao Zedong’s drive to industrialise China in the 1950s and 1960s. Today, it is home to one of the tallest statues of Mao. As of 2016, there were about 180 public statues of Mao around China, from more than 2,000 at the peak of the Cultural Revolution, according to the party-run tabloid the Global Times.

The Mao statue in Shenyang was inaugurated in 1970 at Zhongshan Square 中山广场. Built by the students of the art academy at Shenyang, the base of the statue is surrounded by images of heroic workers, peasants and soldiers that used to carry the Little Red Books. It is worth noting that the buildings around the square predate the Japanese occupation and many were built by Japanese architects.

Shenyang’s Tie Xi district was the epicentre of China’s industrial heyday in the 20th century, until the 1980s. There is a marathon nine-hour documentary 铁西区 Tie Xi Qu: West of the Tracks that records Shenyang’s industrial demise. AB had watched it before and was keen to see the Tie Xi district, so I followed along.

We were at the Industrial Museum of China 中国工业博物馆 which is housed in a former steel foundry. The section that interested us most – which was the interiors (or remains) of the factory – was under renovation. We had read online that there is a “workers’ canteen” where visitors can order food similar to what factory workers in Tie Xi would eat, all served in metal bowls and cutlery. We were told that the dining hall remains in use but it is no longer open to the public. Boo.

Famished, we headed out in the midday sun to find food. After wandering for half an hour amidst decommissioned smokestacks and cooling towers, we found an underground supermarket.  We bought some chestnuts, mixed nuts, and water. This would probably not have been enough to fuel the workers who used to toll in the surrounding factories.