It was my first time in Yunnan. I was there for work, a photo shoot, and stayed at Banyan Tree Lijiang. 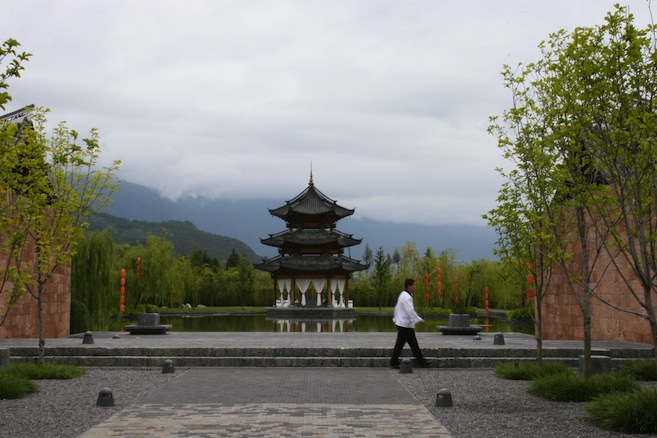 Lijiang is renowned for its UNESCO World Heritage Site: Old Town of Lijiang (丽江古城), which consists of Dayan, Basha and Shuhe villages. 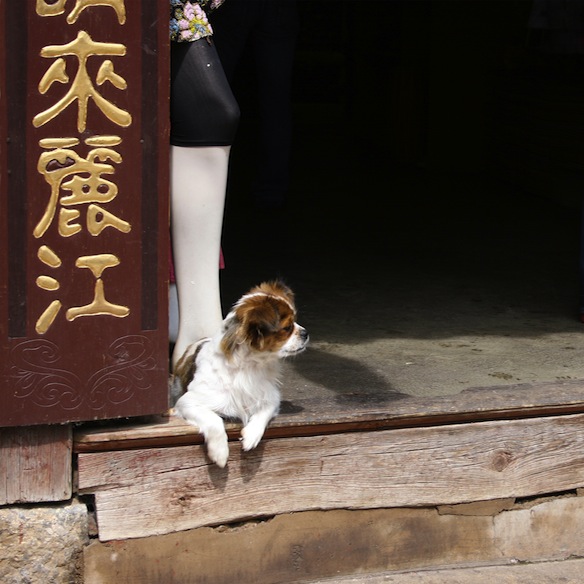 The preserved Naxi architecture and picturesque settings in Dayan old town 大研古镇 attract hordes of tour groups. I remember feeling rather overwhelmed by the sea of tourists when I was there on my own. 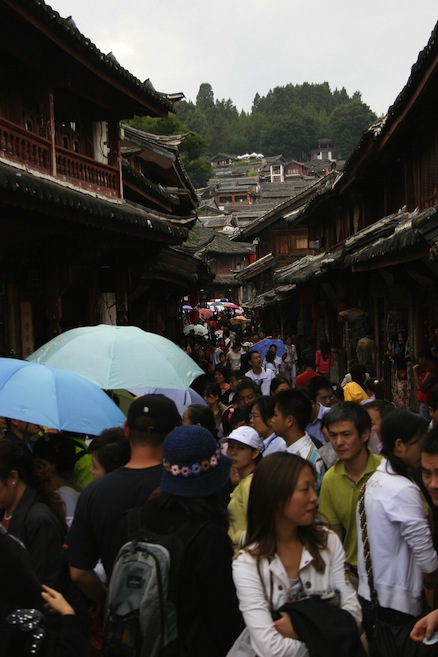 To escape from the crowd, I made my way through the alleys and, gradually, up the stairs and eventually stumbled upon peace and quiet. 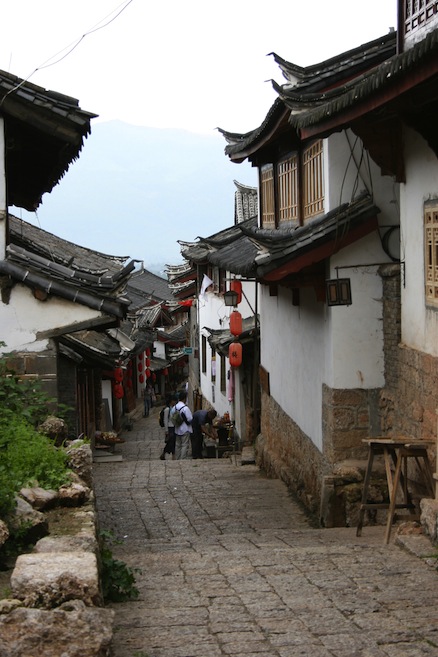 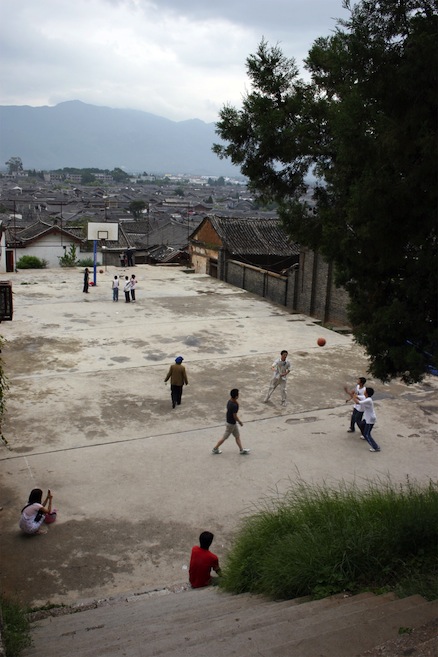 I imagine that this is probably how most of Dayan used to be like before its UNESCO World Heritage status came into effect. 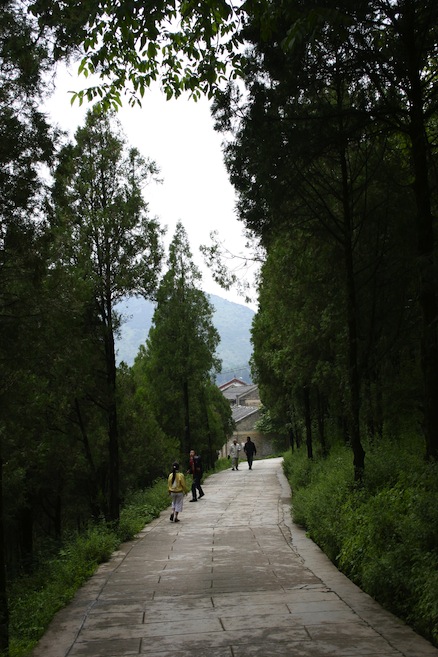 From the top of Lion Hill 狮山, which forms the western boundary of Dayan old town, the view stretched over the curved slate rooftops of the traditional houses and was framed by rolling green hills. It was such a pretty view and there was barely any tourist in sight. 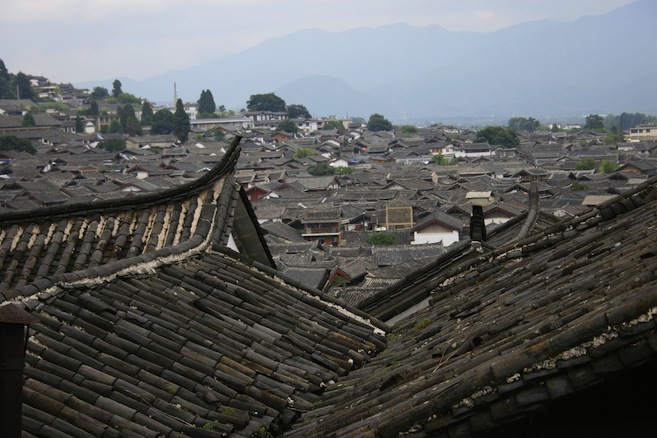 Naxi script is the only remaining pictographic script in China that is still in use today, albeit mostly by the elderly Dongba priests. 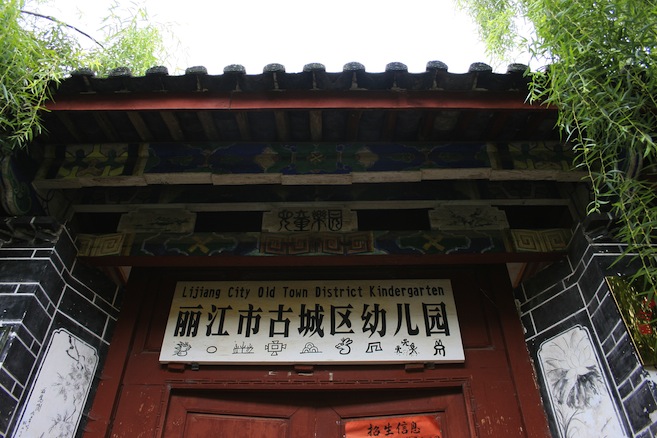 Back at Banyan Tree Lijiang, I managed to squeeze in some free time between sunrise/sunset shoots, pots of red ginger tea (to keep me warm as it was unexpectedly chilly and rainy that summer), and catching up on work emails.

So I arranged for a ride to the Jade Dragon Snow Mountain 玉龙雪山. Got to love how literal the English name is! Had the weather been better, I would have been able to see the mountain from my villa.

The taxi brought me to the cable car station, which is 4506 metres above sea level. It was quite cool to ride the cable car during such foggy weather especially when we emerged suddenly from the clouds to views of tall evergreen trees beneath us. Almost felt like the cabin was floating through clouds! 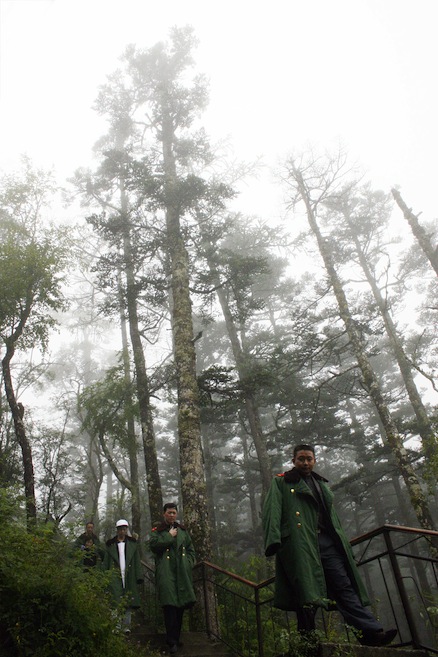 The Beijing Olympics was taking place when I was there. Olympics fervor was abound, even on the Jade Dragon Snow Mountain where you could pay a token amount to get your name engraved on a plastic ‘gold’ medal! 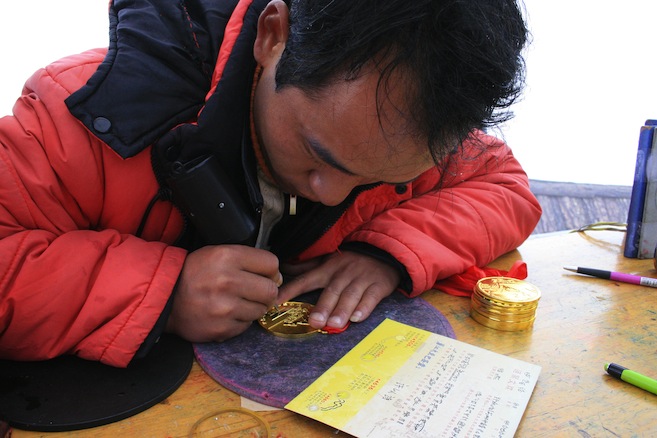 I made it to the highest viewing point of 4680 metres, which was a relatively easy climb of 174 metres in spite of the high altitude. As it was very misty, I couldn’t see beyond 50 metres and no sight of Lijiang Old Town obviously. But it was quite funny to see some of the Chinese tourists vigorously inhaling on the oxygen canisters that were on sale. 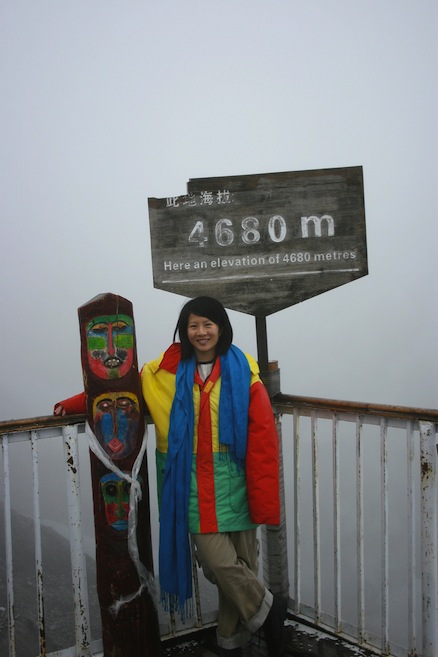 Next stop: Impression Lijiang 印象丽江
This outdoor production by Zhang Yimou engages about 500 actors and 300 horses, and uses the Jade Dragon Snow Mountain as its theatrical backdrop. 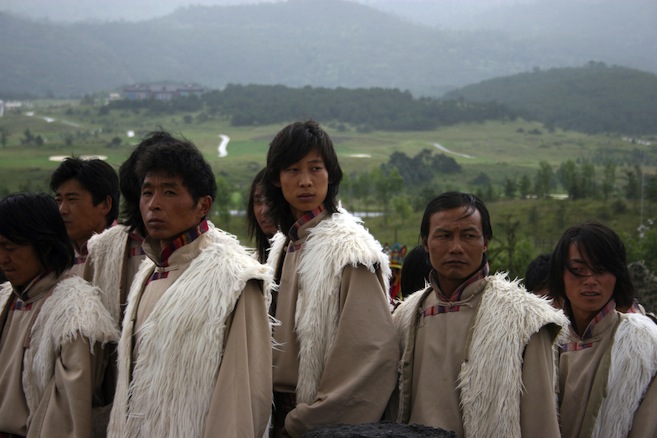 This choreographed song, dance, music performance has to be experienced in person in order to feel its intensity. I had gone there half expecting something cheesy and I ended up tearing at the end of the performance. Sniff. The drizzle gave me the perfect cover as I wiped my eyes with my hands. 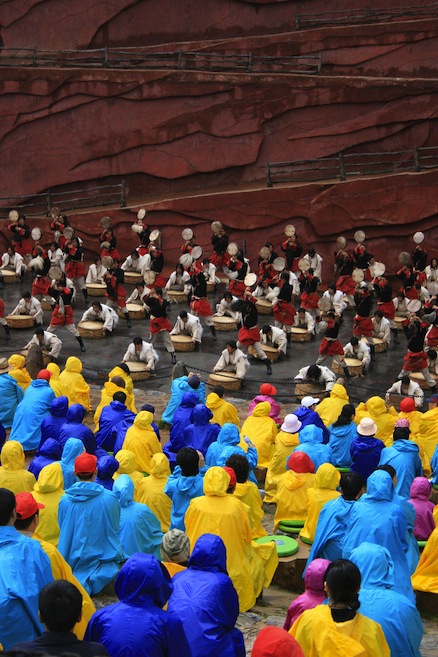 Shuhe village 束河 is about 20 minutes on foot from Banyan Tree Lijiang.

Here was where we had our first photo shoot, on a weatherworn stone path that was once part of the Ancient Tea-Horse Road 茶马古道 (another literal English translation of the original Chinese name). 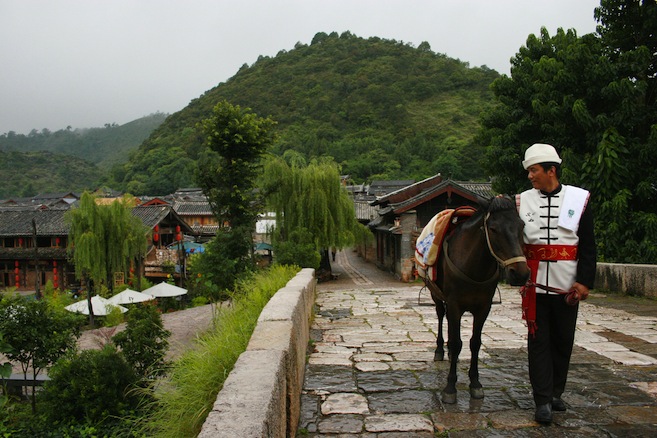 On my last day in Lijiang, I took a walk to Shuhe. Here, I really like, much more than Dayan, as it was a lot less commercial and charming in its own quiet way with clear willow-lined waterways running though the village. 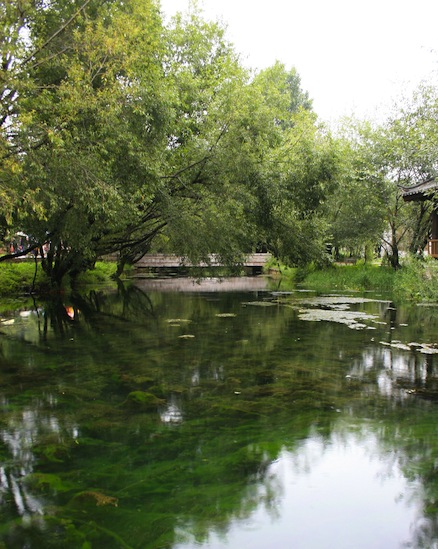 The taxi driver who drove me around on a previous afternoon told me that if I was interested in learning about pu-erh tea and the history behind the historic trading route, I should definitely visit the Ancient Tea-Horse Road Museum 茶马古道博物馆 in Shuhe. Which I did and am so glad that I did so for I had a memorable time in the old courtyard house. 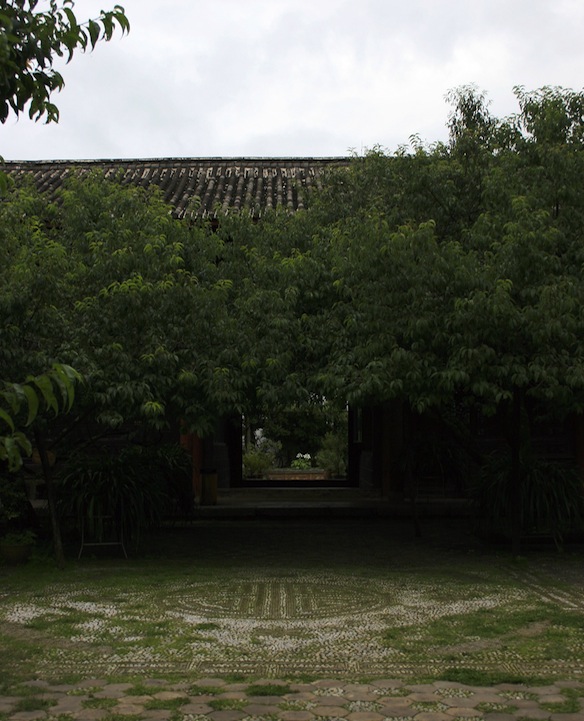 A lady volunteer at the museum started chatting with me and we sat by a low table in a small, quiet room tasting different types of pu-erh tea as she explained the production processes and tasting notes, as well as how to prepare a good cup of tea. I was joined by a couple from Hong Kong and we spent a good hour chatting with one another about our countries and local cultures in between sips of fragrant pu-erh tea as the sun peeked through the wooden windows.

I left with a ‘cake’ of raw, pressed pu-erh tea that was recovered from an abandoned warehouse of sorts in Lijiang… I can’t recall the tale behind it and all I have for reference are the words “女儿红” printed on the piece of paper that is attached to the tea cake. 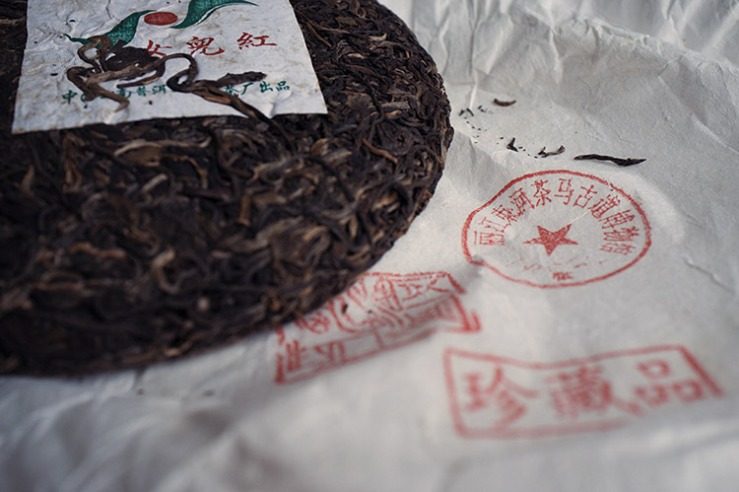 The volunteer told me to leave the cake to age in a dry place for at least two years – it was already in year two of its aging process when I bought it – as the taste would become more mellow and fragrant. So I wrote “August 2010: Ready to drink” on a piece of paper, packed it with the tea into a ziplock bag which I put away in a dry corner of the kitchen… and forgot about it after some time.

In the meantime, I was drinking pu-erh tea made from another cake that was a present from my dad’s colleague. That had a strong taste, almost overly so, but I didn’t let it bother me too much as I was drinking it mainly because I read that pu-erh tea can help with weight loss!

I was back in Singapore in September 2011 to pack my stuff that I wanted to ship to Brussels. While looking around the kitchen cabinet for a thermal flask, I came across the forgotten piece of pu-erh tea that I had brought back with me from Lijiang. I added it to my shipment for Brussels as I assumed that I’ll probably get mediocre, or lousy, Chinese tea here. I moved into my apartment in November and promptly put the tea on a high and dry shelf behind bottles of spices.

And forgot all about it… until yesterday morning.

It was a cold winter morning and I was working from home. I looked through my box of ginger tea sachets and suddenly thought of the pu-erh tea. I reached for it and caused several baking items and spices to fall over me when I pulled out the tea from its lofty corner. It has been aging for six years now. What would it taste like? 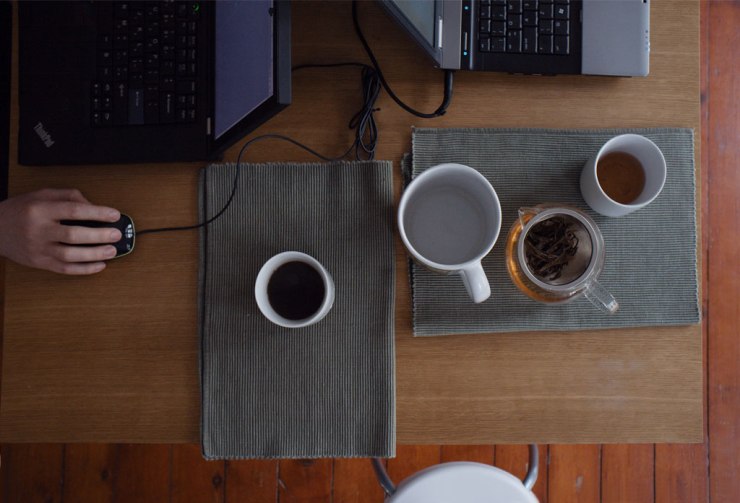 I don’t remember much of what the volunteer shared with me about making a good cup of tea except that I should ‘rinse’ the tea leaves the first time and not add boiling hot water to the pot. My first sip of the tea made me feel incredibly contented, soothed and happy. Such a smooth yet robust taste. It was simply beautiful and brought back fond memories of my short visit to Lijiang.

Here’s a well-written article on National Geographic about this historic trading route between China and Tibet.

For a quick introduction, here’s a photo of the description at the museum: 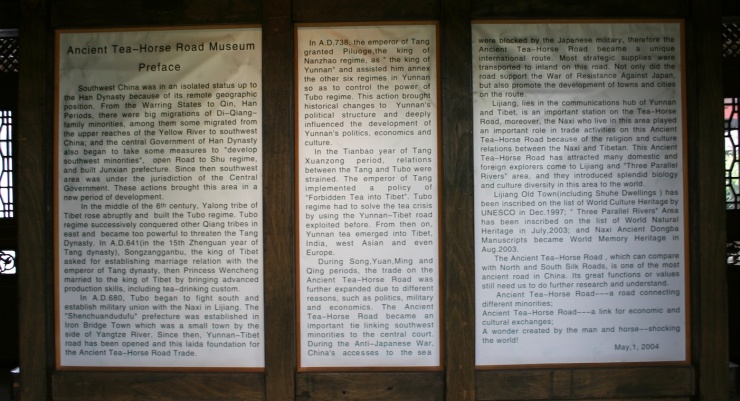 Happy reading over a cup of hot tea!