I came across Le Galopin while researching for somewhere to bring my friends from Singapore who were in Paris at the same time when I was back in the city for a short holiday. That it is at Rue Ste. Marthe in the 10th arrondissement was a key deciding factor as the area isn’t overrun by tourists and represents a more genuine side of Paris. Plus it is only 10 minutes on foot from AB’s place. I also like the street for its cheerful, colourful shopfronts housing tiny restaurants, galleries and shops (including the amazing La Tête dans les Olives).

While reading about Le Galopin,  I learnt that the chef, Romain Tischenko was the winner of Top Chef 2010. I don’t watch TV so I don’t know anything about him. But since he won a nationwide cooking competition in France, he must be good right? I reckon that he and his brother (who takes the orders) must have good taste going by the restaurant’s website.

We made a reservation for 19h30 as this was the only time that there was an available table for that day. No wonder, as the restaurant is rather small – I think it sits around around 24 indoors and you can see the chef preparing the food in his kitchen.

Le Galopin serves a seven-course tasting menu for dinner for 44€: two amuse-bouches, a starter, a fish, a meat, and two desserts (or a cheese plate) to end the meal. The menu changes daily. 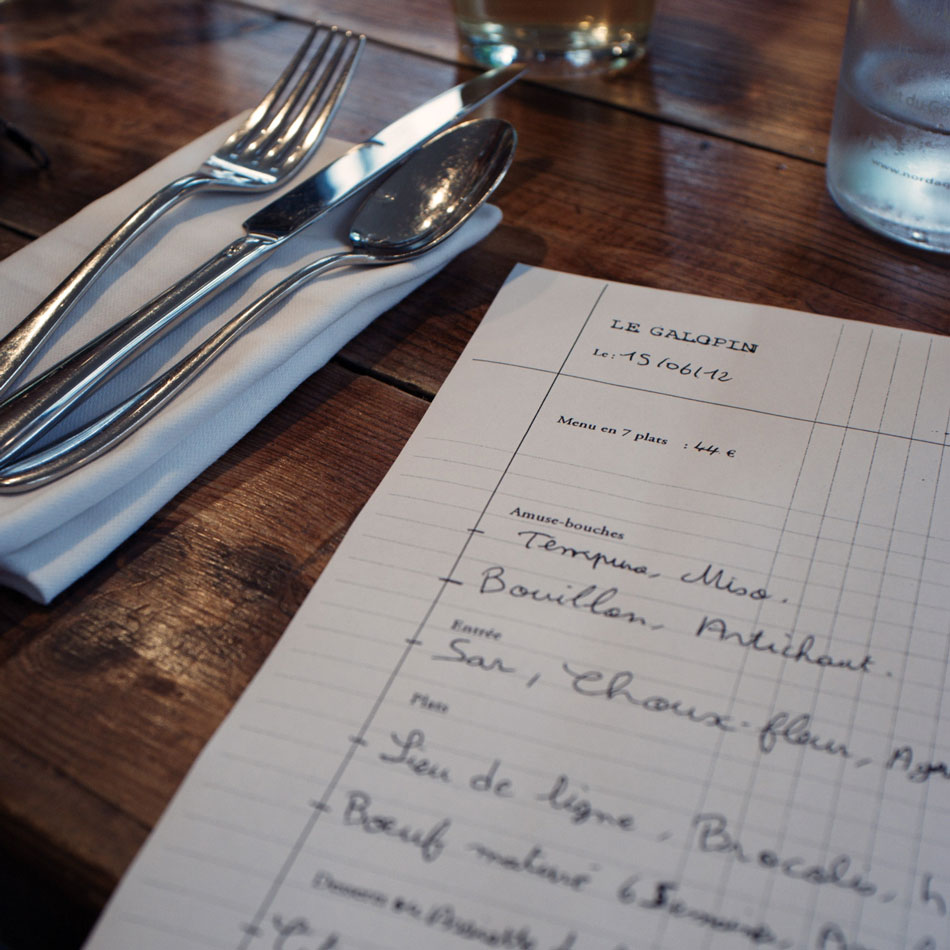 With tasting menus, it’s always a little of a gamble as you don’t know whether you’d like what is being offered. Happy to say that everything that we had at Le Galopin was delicious. Each with its own distinct mélange of flavours, yet not overwhelming. I also like that the portions were reasonable and did not leave me in a food coma.

The entrée of sar fish, cauliflower and citrus fruits:

The main courses of fish and aged beef complemented each other very well. I have no idea what was the brown powder that was sprinkled atop the fish, but the flavour came together very well with the fresh ‘green’ taste of coriander and green peas.

Simply titled as “citron, gin, concombre” and “fraise, crumble, rhubarb”, the desserts were delightful. The former was a citron-gin sherbet with cucumber that looked deceptively simple but amazed me with its refreshingly yet subtle blend of gin and lemon – it was my favorite of the seven courses! I wonder if chef Tischenko used Hendrick’s gin in here. The latter was an interesting deconstructed strawberry-rhubarb crumble that melts in your mouth.

I’d highly recommend Le Galopin – which by the way, means ‘rascal’ in French – for its innovative, modern French cuisine. Next time, I shall try the lunch menu, which at 24€ for three courses is good value for money!